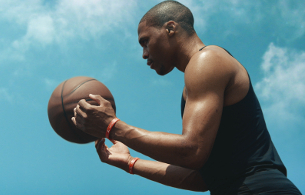 While the XXXI was inspired by the sneaker that started it all — the banned-by-the-NBA Air Jordan 1 — the shoe also represents a leap forward in performance and style. The launch campaign, from Wieden+Kennedy New York, similarly nods to the golden age of flight while offering up a modern take on Jordan’s innovative “Anti-Gravity Machines.”

The campaign’s cornerstone spot, “Runway,” debuts during the 2016 MTV Video Music Awards on Sunday, August 28, and on Jordan’s social channels. The ad features NBA star Russell Westbrook preparing for takeoff as the voiceover delivers the subtext-laden line: “Some run. Some make runways.”

The spot harks back to the 1985 introduction of the Jordan brand, when Michael Jordan was first seen taking flight in the Air Jordan 1 (the new ad even uses the same jet engine soundtrack as the original).

Producer, social media star, lifestyle guru, and this year’s VMA host, DJ Khaled will introduce the XXXIs during Sunday’s show with a series of Snapchat videos. The videos, appearing during the broadcast in full, vertical Snapchat glory, will show a pre-show Khaled reacting to the shoes, and to the strange phenomenon of the Jordan XXXI hoverbox...

Yes, those boxes are actually floating. No VFX tricks necessary when you’ve got Anti-Gravity Machines. Jordan and WKNY partnered with levitation specialists Crealev, which used magnet technology to build four special boxes that actually hover in mid-air. The anti-gravity boxes are featured in the VMAs ads, and are scheduled to appear IRL at Jordan’s Terminal 23 space in New York and in the 4 Jordan flagship stores in LA, Chicago, NYC, and Toronto.

Taking the anti-gravity theme to its logical conclusion, MTV created a special VMAs cross-promo featuring the Moonman ascending to space, assuming the “Jumpman” pose, and leaving the XXXI’s “Banned” footprint on the moon.

The campaign kicked off earlier this summer with a teaser re-release of the 1985 “Banned” spot featuring Michael Jordan in the infamous red and black 1s.

The launch will continue into the fall with additional spots including one starring the San Antonio Spurs’ Kawhi Leonard.

The Jordan XXXI pays homage to the shoe that helped create sneaker culture as we know it--the Jordan 1, released in 1985. The shoe was famously “banned” from the NBA (its black and red colorway ran afoul of league policy, and wearing it on the court came with a $5,000 fine).

But the XXXI isn’t just a redesigned classic. While the launch colorway nods to the 1, the shoe is designed to stand as a forward-looking new icon for the brand. The shoe features a first-of-its-kind Flyweave-into-leather upper, the original Air Jordan “Wings” logo and a subtle Swoosh--the first time the Nike logo has appeared alongside the Jumpman.