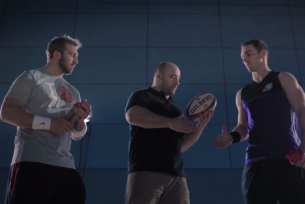 MaxiNutrition ambassadors Chris Robshaw and George North hit the court in the first challenge of a new Head to Head series, commissioned by AKQA with Mob Sport director Marcus Jones.

The commercial was filmed on location at Surrey Sports Park in their state of the art sport and training facility, using the new Sony Fx7 HD camera systems and multiple GoPro’s.  This film is part of a series of challenges to be released over the coming weeks.