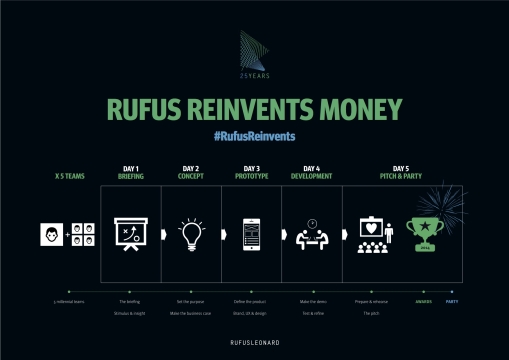 Independent creative agency Rufus Leonard will kick off a unique week-long hackathon event today, which will see it invite global talent from as far afield as Brazil, the US, Canada, Norway and Spain to reinvent the future of finance.

Following the publication of studies such as the Millennial Disruption Index – which shows that 68% of millennials (those aged 18 to 34 years old) believe in five years’ time the way we use money will be totally different and 33% believe we won’t need a bank at all – the financial sector was found to be the sector at the highest risk of digital disruption.

The event, called Rufus Reinvents Money, aims to engage the skills of this very audience it is seeking to reach. Rufus Leonard has embarked on a tactical global recruitment drive for the initiative in collaboration with digital strategy consultancy Evolver, which has enabled it to source some of the world’s best creative and entrepreneurial millennial talent. Participants from renowned institutions such as Harvard and Hyper Island are flying in to take part, as well as established entrepreneurs who are already running their own accelerators. 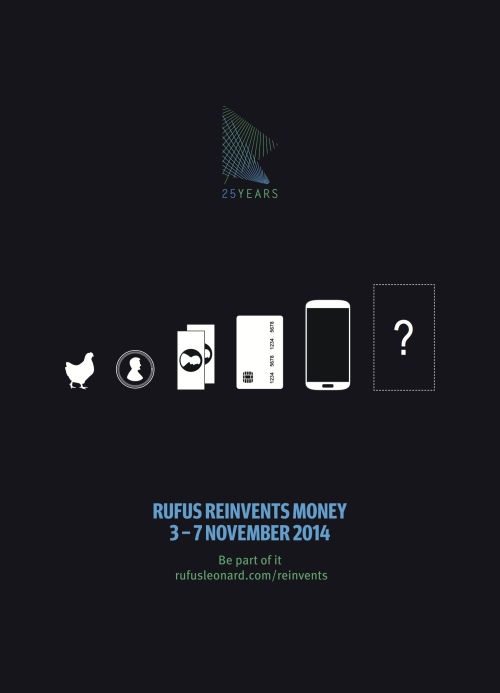 The hackathon will kick off at 13:30pm today with an afternoon of talks at Rufus’s Farringdon offices on subjects such as the end of ‘big’ IT, millennial values, the shifting face of technology disruption and innovation. Speakers will be headed by BBC media veteran and inventor of the iPlayer Tony Ageh as keynote speaker, as well as Warner Music, Adaptive Labs and Beautiful Corporations. Rufus Leonard’s clients, which include Lloyds Bank, O2, British Gas, Royal Mail and Bounty will all be in attendance.

Teams will then be incubated throughout the week to work on their ideas, while receiving expert guidance from Rufus’s experts. They will attend a programme of bespoke masterclasses on subjects such as: Prototyping a value proposition, User experience, Brand identity and storytelling and Pitch dry-run.

They will then pitch their final ideas, which will include concept and business cases, to a panel of industry experts from Oracle, Hey Guevara and Lloyds Banking Group during a Dragon’s Den-Style showdown this Friday.

Neil Svensen, CEO, co-founder and chief creative officer at Rufus Leonard, said: "We’ve worked with probably every type of financial institution possible including Amex, Visa, Deutsche Bank, Citi Group, Morgan Stanley and Lloyds to name a few, so we felt we were well-placed to do this.

“We’re always looking to the future, and so we wanted to do something to help guide this next stage of the financial sector. We've worked at the forefront of financial services for 25 years and actually launched the UK's first ever online banking tool for Lloyds Bank. We wanted to invest all our skills and expertise in digital, as well as bring our clients together with an audience that is notoriously hard-to-reach. This is the first event by millennials, for millennials where they are actually creating something that could be part of their reality. We’ve got some phenomenal talent on board and so we’re really eager to see what these minds come up with.”

Ideas can range from anything from a digital solution to a tangible product or a service but must be able to be made into a prototype within four weeks. Each team will be made up of five members – a mixture of external talent and internal Rufus talent. Teams were introduced to eachother last week via a Google hangout.

The agency will also be compiling its own research into millennials and finance. This is believed to be the first piece of research into UK millennials on this subject following previous studies which have focused on a US and Canadian audience. The study will look at seven key areas highlighted by results of previous studies, including trust, insurance, values, investment, branch visits, loyalty and priorities.

Rufus Leonard recently added four major UK brands to its roster, to be announced shortly. The agency has one of the largest digital departments of all independent agencies and is a leader in technological best practice.

Rufus Leonard has been working in financial services since 1989, launching a number of firsts for financial services brands including American Express, Citi Group, Visa, Deutsche Bank, Morgan Stanley, Lloyds Banking Group (including Lloyds, Halifax and Scottish Widows), Bacs and others.