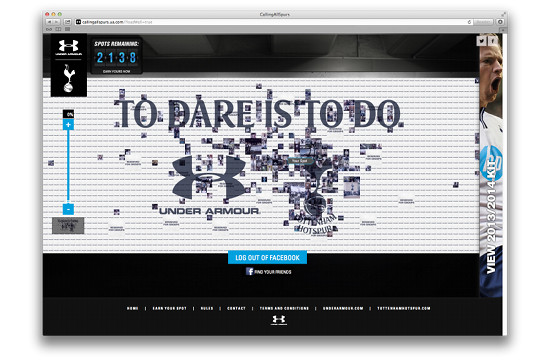 The campaign, created by Red Tettemer O’Connell +Partners (RTO+P), sports the ultimate payoff for club fans – their picture placed on the revered players tunnel at White Hart Lane. A chance to be the last face their favourite players see before they take the field and show the world their #IWILL.

Fans can earn a coveted spot on the wall by visiting callingallspurs.ua.com and submitting a photo on the site proving their “fanhood,” or using the hashtag #CallingAllSpurs on Instagram or Twitter (via @CallingAllSpurs). Under Armour will then select 2400 submissions to be featured offline, and cover the tunnel wall with prints of the submitted photos.