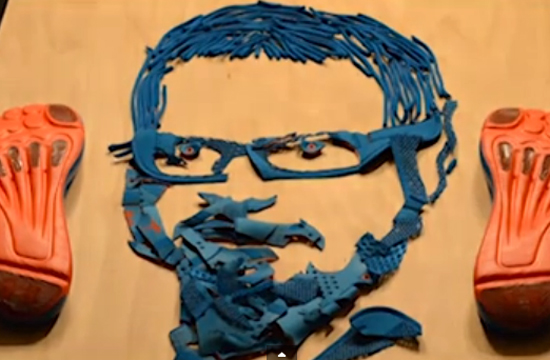 “When we saw Adam’s body of work, we knew he could be a great dot connector for the agency and our clients,” said Steve Red. “And he’s self-confessed sneaker freaker, so we get style tips in the deal.”

As a fun way of welcoming talent to the agency, RTO+P creates a unique portrait for each new hire. For Leaventon, the agency shot a stop motion video of his portrait being formed out of an Under Armour sneaker.

Most recently, Leaventon consulted on business development and business strategy for New Balance Athletic Shoe and PUMA SE. Before that, Leaventon was Global Director of Merchandising at DC Shoes, Inc., where he handled all men’s and kids footwear lines.

And for seven years prior, Leaventon served as Director of Merchandising, US Wholesale Footwear for PUMA North America, and was responsible for the direction of the $200M US lifestyle footwear business. While there, he developed strategies to achieve US industry leadership in non-traditional categories and was responsible for resurrecting PUMA as a trend heritage brand in the US.

Last year Leaventon was named one of the 50 most influential people in the history of footwear by Complex.

Commenting on his new role, Leaventon said, “I knew that RTO+P was the right place for me because they subscribe to the same sensibilities - don’t leave a mark, tear the frame off it. Plus I have a pretty diverse background, so instead of focusing me in one direction, RTO+P put me in the middle of everything and asked me to make new connections and amp up existing ones.”

In his spare time, Leaventon loves to spend time with his wife and 5 ½ year-old son. He also enjoys listening to old rap music (he calls himself a “rap dictionary”), and adding to his huge collection of sneakers.