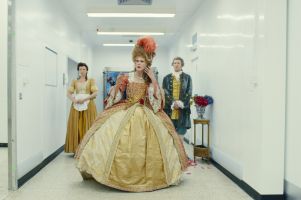 Created as the centrepiece of the show, Ridley Scott Associates and Black Dog Films director Toby Dye has devised and directed ‘The Corridor', co-written with Chris Bovill and John Allison. 'The Corridor' is a ground breaking film installation designed to provide viewers with a spectacular immersive experience at the heart of the exhibition.

Starring Joanna Lumley and Aidan Gillen, the installation features four distinct films in which four narratives bleed into one another, crossing Kubrickian corridors as they weave together a disorientating, hypnotic tale of control, violence and a doomed cycle of power.

Celebrating the legendary filmmaker’s themes and stylistic devices, the installation plays on a continuous loop, providing an immersive, interactive experience that enables the viewer to self edit the narrative, creating a new perspective on each subsequent viewing.

Kubrick had agreed to direct the video for a track on UNKLE's 1998 Psyence Fiction album, but died before he could do so, leaving only one track (Lonely Souls featuring Richard Ashcroft) without a video. Made with the blessing of Kubrick's estate, ‘The Corridor’ is that video.

Director and writer Toby Dye said: "For me, the unblinking red eye of 2001 A Space Odyssey’s HAL 9000 perfectly encapsulates the cinema of Stanley Kubrick. For all his films share that same coolly analytical gaze, studying from afar mankind and all its many foibles. Kubrick’s camera never appeared to follow the action, it was as if it moved of its own accord and the tableau of life simply unfurled before it. It was his seemingly never-ending camera zooms from Barry Lyndon that first sparked the seed of the idea behind The Corridor, before that idea grew, and grew into something that was, at times, infuriatingly ambitious, but I hope in the best tradition of the man who inspired it."

Behind the Scenes Photographer: Irene Gomez