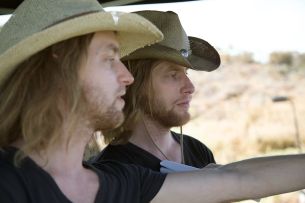 Globally renowned production powerhouse RSA Films is pleased to announce the Freise Brothers have signed on for commercial representation. Among the industry’s most exciting emerging filmmakers, Nathan and Adam Freise—a.k.a. the Freise Brothers—have gained attention for their cinematic, design-inspired storytelling. Their work includes commercials for Newport Beach Film Festival, homeless assistance agency PATH, On Shoes and jeweller Atelier Minyon. But it was their own indie production of Tesla 'Not A Dream' that landed them firmly in the spotlight. The branded film depicts a Tesla in its electric car splendour visiting a surreal land of oil and gas, and captured the attention of visionary Tesla co-founder Elon Musk who tweeted to nearly 4 million followers that he loved the video.

“We admire and love working with brands that want to change the world in a creative way,” Nathan Freise explained.  “We were inspired after reading Nikola Tesla’s biography, then seeing David Bowie play him in The Prestige. We shot ‘Not A Dream’ over two days in the desert and spent two months on post. We shared it on Tesla’s content page and started getting traction in the press. One night Adam was up late in Los Angeles with his newborn and thought his phone was malfunctioning because he kept getting pinged with Twitter notifications. I was in Taipei where my wife is from and was experiencing the same thing over breakfast. We got on the phone and realised Elon Musk had tweeted our Tesla film. That’s when we knew it had really caught on.”

“The Freise Brothers are a fantastic addition to RSA,” said Jules Daly, president, RSA Films. “Nathan and Adam are very talented storytellers with a unique cinematic style, drawing from backgrounds as designers in the architectural space, as well as nimbleness in visual effects. We look forward to unleashing their talent on our clients for memorable and exciting new work!”

“Our goals align perfectly with the culture of RSA,” the Freise Brothers said. “RSA has a long legacy of creating beautiful, cinematic commercials. We are huge fans of Ridley’s work, as well as Jake, Jordan and Luke’s—all the Scott’s—and are thrilled with the opportunity to push boundaries and evolve our filmmaking craft with RSA.”

From Union, MO., outside of St. Louis, The Freise Brothers, 35, are ‘mirror’ twins (with qualities like opposite dominant handedness), and complement each other on set as well. Adam focuses on actors’ performances while Nathan is in his element behind the camera. They thrive on the upfront collaboration with clients, as well as on-set production and post; both are versatile in animation, rendering and computer modelling from working as designers at architectural firms in Chicago. In 2008 they moved to New York for graduate school; Nathan attended SVA, while Adam went to Columbia Graduate School of Architecture.

After collaborating on short film projects that were recognised in film festivals, Adam and Nathan moved to Los Angeles in 2012 via a stopover in Taos, New Mexico. There they filmed “4 Ton Dream,” which uses the open country as a backdrop to invite the worn out to dream again. That landed the Freise’s recognition in SHOOT’s 2015 New Directors Showcase, and their first commercial representation at Biscuit before signing with RSA.