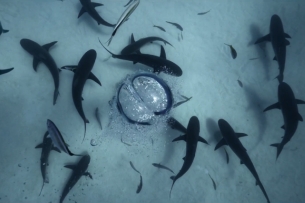 “Shark Dancer”, shot in the Bahamas, follows shark consultant and trainer Cristina Zenato as she takes a dive with some of nature’s deadliest predators. Whereas “Feeling Colour” details the creative process of John Bramblit, an accomplished and talented American artist who paints by touch due to his blindness.

Both films shine light on two unique individuals who have a special relationship with touch.