Rothco Opens the Digital Doors of the Heineken Rugby Club… 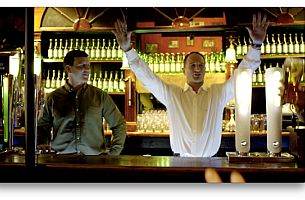 In a brand new campaign aimed at extending the reach of their official rugby sponsorship, Heineken and creative agency Rothco are opening a bespoke online platform for fans. Heinekenrugbyclub.com has been created to enable and inspire rugby supporters to share the social opportunities of rugby.

Phase one of the campaign launches on Wednesday March 16th with a tongue-in-cheek online film. The spot highlights the benefits of opposing fans working together. To get themselves out of a tricky dry bar situation after the taps at the pub run out during a national game, fans must sing together to get them flowing again.

Karl Donnelly, Sponsorship Marketing Manager at Heineken Ireland, says: “Heineken has a enjoyed long-standing, meaningful relationship with rugby and the Heineken Rugby Club is our exciting and ambitious plan to celebrate rugby fans in a way that’s never been done before. Heineken Rugby Club will look to bring fans together by shining a light on what makes rugby supporters great by giving them a fresh, new way to enjoy the game they love on and off the pitch.”

Account Director at Rothco, James Moore, comments: “The aim is that Heinekenrugbyclub.com will become a supporter-driven community. What better way to launch the club than by celebrating the people who make the sport what it is – the supporters. Sociability is at the core of the Heineken brand and this idea. This is about the fans, not the analysts or rugby experts.”

Heineken Rugby Club will recruit and connect supporters from all over the world. Once registered, members will be given exclusive rewards and entered into the members’ lottery for match tickets. Heinekenrugbyclub.com will become a fans’ community filled with recommendations on the best pubs to experience matches and the inside track on cities for upcoming away fixtures.

The first part of the campaign launches in Ireland, but the Rugby Club intends to be rolled out across other rugby nations in stages across 2016.

James adds: “We’ve been so excited about launching this campaign for Heineken. Rugby fans are unlike any others. There is a comradery and love of the game that transcends which team you support. But what we and Heineken noticed was that although there are plenty of clubs for people who are built to play the game, there wasn’t one for all the fans who love to watch. Opening the rugby club will help to open up the rugby community and become a place where the world's cultures, knowledge and passion for rugby will collide.”