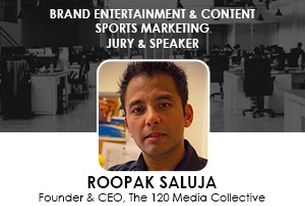 The prestigious Cristal Festival has invited Roopak Saluja, Founder & CEO, The 120 Media Collective, to be a member of jury for Brand Entertainment & Content and Sports Marketing this year. He will also be speaking at the programme on the subject of Online Video in the Brand Content space.

A global summit for Media & Communications, held every year in Courchevel (French Alps), the 15th edition will be held from 9 to 13 December, 2015 with a special focus on Content Creation in the digital era and Content Distribution as a result of data & technological innovations.

At a time when content creation and distribution is growing rapidly in the digital world, Roopak’s appointment as a frontrunner in the area is particularly significant. Commenting on the development, Roopak said, "Cristal is a unique event that seamlessly straddles the cutting edge of content and communications spaces. It's where the future lies and I'm greatly honoured to be on their jury as well to be speaking at this year's edition."