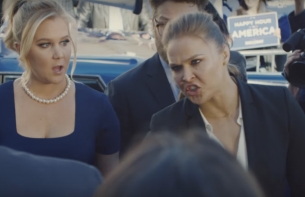 Rousey shot the content last month in LA with Schumer and Rogen, with Schumer posting an Instagram photo from the set that spurred rumors about Rousey’s role in Bud Light’s Super Bowl spot. And while Rousey is not in the first ad launching as part of this campaign on CBS, the new video has her playing an active role in the #BudLightParty…as Schumer and Rogen’s security guard who “tackles” the issues.