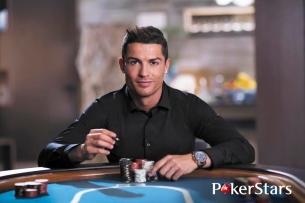 PokerStars, an Amaya Inc. brand, launched a new advertising campaign on Facebook this weekend starring global sports giants Cristiano Ronaldo and Neymar Jr. The players’ Facebook fans were given an exclusive preview of the videos, which can now be viewed on their Facebook Pages, two weeks before the commercials air for the first time on television globally. You can check them out here and here.

The world’s largest online poker operator will combine the enormous popularity of Ronaldo and Neymar Jr with the unparalleled scale and sophisticated targeting tools offered by Facebook to engage gaming and sports fans and maximise the impact of the campaign. Ronaldo is Facebook’s most popular public figure with more than 104 million fans. Neymar Jr has more than 53 million Facebook fans.

The athletes star in short videos produced by acclaimed commercial and music video director Vaughan Arnell and shot on location in Madrid and Barcelona. Arnell has worked on TV commercials for brands including Levis and Dove, but is most famous for his collaborations with Robbie Williams and One Direction. Each video features poker as the centrepiece of the athletes’ evening with friends, and highlights the fun, social and competitive aspects of the game.

PokerStars announced sponsorship deals with Brazilian football superstar, Neymar Jr, and arguably the world’s best known footballer, Cristiano Ronaldo, earlier this summer. The signing of the two global football giants is a massive coup for the brand and PokerStars’ largest sponsorship to date.

Tarquin Henderson, Head of EMEA Gaming Sales at Facebook, commented: “People come to Facebook to discover things that matter to them, whether it’s photos from their friends and family, videos from brands they love, or posts from their favourite celebrities. PokerStars’ campaign combines the best of this – fresh, engaging content from two of the biggest footballers on the planet. And thanks to Facebook’s scale and unparalleled targeting tools, these videos will reach the most relevant audience, from poker and gaming fans to football aficionados.”

Michael Hazel, Interim CEO at the Rational Group added: “This is the biggest PokerStars marketing campaign in history and we are excited to launch with exclusive distribution on Facebook. Both videos show how each of the stars love the game of poker in their own unique way. The vast numbers of fans who engage with both stars make Facebook a great platform to reach a big audience. To put this into context the combined fan base for both superstars is a huge 157 million; the estimated global TV audience for the recent Champions League final was 180 million.”

To coincide with the global TV launch on August 17, PokerStars will also be running a separate promotion called ‘Dream Team Collection’. This involves online poker challenges and puzzles that incorporate Ronaldo and Neymar Jr, giving fans and poker players a chance to win various prizes plus a shot at $1,000,000.