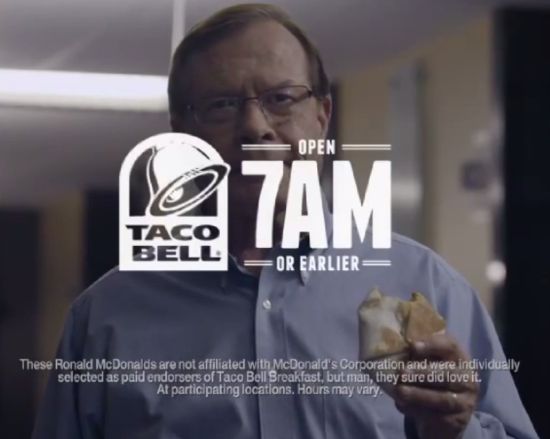 If you’re going to introduce a new breakfast menu to a country used to eating breakfast a certain way, what better spokesman than a guy named Ronald McDonald? In a new campaign for Taco Bell’s breakfast menu, which is launching nationwide today, we found 25 real Ronald McDonalds and invited them to try Taco Bell breakfast—and they loved it.

The 25 Ronalds in “Wake Up, Live Más” are real people, found by talent agencies that specialize in non-actors for things like reality shows. The agencies combed through social media, including Facebook and LinkedIn, to find our stars. Some of the Ronalds, who’ve been teased about their names their whole lives, thought it was a prank call.

“Wake Up, Live Más” was shot by Oscar-winning documentarian Errol Morris in order to bring a documentary style to the ad and help these non-actors open up on camera.

“The advertising had to have a scale that befitted the challenge of launching an entirely new day-part for Taco Bell. Something that had food and price wasn’t enough,” says Deutsch LA CEO Mike Sheldon. “It had to be something that caused a cultural conversation about what we eat for breakfast.”

You can see the spots below