Trends and Insight 742 Add to collection

Struggling to decide whether to take a job? Or trying to hook in a top tier filmmaker? Check out the dynastic director’s failsafe formula 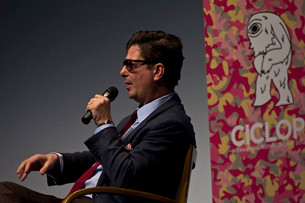 Directing can be a brutal business. Relentlessly pitching over-and-over-and-over against often the same directors can lead even the industry’s biggest names to take jobs they don’t really want. Roman Coppola, however, is lucky enough to not have that problem.

In a live interview at the Ciclope International Festival of Craft 2014 in Berlin, the commercial and music video director and founder of The Directors Bureau revealed to the crowd his trusty ‘RC Point System’, a method that ensures he only ends up working on worthy projects. The system involves numerous quotas that either add or subtract to an overall score that’s determined by Coppola’s producer. Only jobs scoring six or higher make the cut and are put in front of Coppola.

(Looking for jobs which rate a 6 or higher)

I get to write or contribute significantly to script – ADD 2

They use me as a ‘spokesperson’, or there is a paid PR component – ADD 1

Shoots outside of the above cities – SUBTRACT 1

Stage of back lot shoot – ADD 1

Extended prep, longwinded back and forth – SUBTRACT 1

“I just cooked it up because I realised that these are the things that I was looking for,” said Coppola. “Sometimes I would work with people and they’d be confused about why I was turning stuff down, so I made this as an aid [to explain it]. And yeah, it’s pretty accurate.”

But the system is far from perfect, as Coppola went on to suggest: “I might actually amend the list to read ‘incredible agency or creative team ADD 2’.”

His dedication and passion for creativity really shone through during his time on stage, and seemingly his career too. At the beginning of his life as a music video director in the 1990s, he became known as ‘Mr Idea’ amongst video commissioners; a nickname that he’s still proud of today.

For Coppola, the key to great creativity is all about keeping your mind open. “A lot of the time when I was doing music videos more actively, I would keep my mind open and be receptive to ideas that were just out there but not tied to any music. I like to have a feeling about what I might do prior to hearing the song. I sometimes feel like when you hear the song it can clamp down your imagination a bit in a bad way. And there’s nothing worse than hearing something 30 times and still not having an idea. After that it often never comes.”

But even more crucial to creative excellence, according to Coppola, is a sense of risk on the client and agency’s behalf. In a rousing conclusion that would have made the sweetest of music to the strong production presence, he said: “Something I think about a lot is the nature of risk and what is risky. And working in our industry, there is a lot of fear of failure and concern about risk. But for me, risk isn’t so risky. In fact the risky wager is usually safest bet.”