A small Romanian chocolate brand offers to sponsor major international cancelled events around the world with help from MRM Romania, McCann and UM 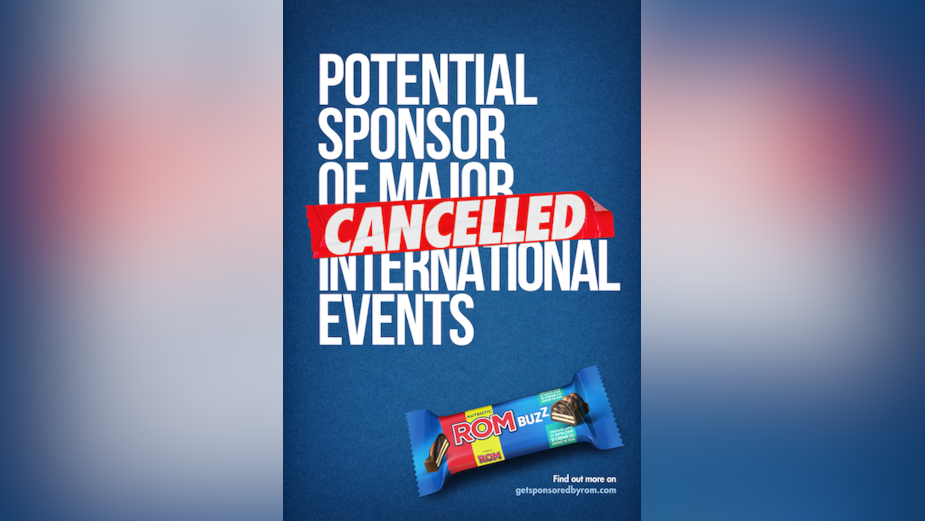 ROM Chocolate, a small Romanian brand wrapped in the colours of the national flag, offers to sponsor major international cancelled events around the globe.

Although an iconic brand on the local market – it’s Romania’s first chocolate bar, launched in 1964 and wrapped in the national flag colours – ROM would never have had the budget to sponsor big international events.

However, for the launch of ROM Buzz – its newest product, a chocolate wafer with rum filling – the brand identified a so-far unexplored territory and decided to take action: reinventing sponsorships, ROM Buzz offers to sponsor the events that it might be able to afford – the CANCELLED ones.

The majority of international sports, cultural, music events have been cancelled for 2020, and with them all advertising budgets that the big brands would have spent sponsoring them. But ROM, the small Romanian chocolate brand that knows how to fight in hard times, is offering to come to the rescue, with a helping hand for some of the cancelled events.

Cancelled events can visit here and find a sponsorship package. The packages are available in a limited number.

“In a year that is marked by a health crisis, when brands give up on some of their plans, we decided to continue our plans of launching a new product – ROM Buzz, a sweet waffle with a lot of rum filling, aiming to sweeten up some of the events that have been cancelled. We have chosen to be optimistic and turn this tough year into the best year for launching ROM Buzz”, stated Gabriela Munteanu, Marketing Director, Kandia Dulce.

“ROM is no stranger to bold campaigns. In recent years it swapped the Romanian flag on its packaging with the American one, creating national rage and reigniting Romanian dormant patriotism; it changed the image of Romanians on Google (from “stupid” to “smart”); it helped the world understand the difference between Bucharest and Budapest; it launched the first AI ambassador of a country and many more.

ROM may not have the marketing budget of big international players, but this always helps us push our creative limits and we couldn’t be prouder to be working for such a brave client.

Also, in the context of today’s world, we believe our industry has the responsibility to help brands not only to act responsibly and make a difference, but also to entertain. We wanted to bring a bit of optimism in the world by proposing a lighter tone of voice in a campaign that tackles the new normal,” stated Catalin Dobre, CCO McCann WG Romania & Regional CD McCann Central Eastern Europe.

“When you have such a ballsy brand personality in your hands as we do with Rom, you feel you have to do it justice every time- yes, also during a pandemic. Enter the Romanian challenger thing once more, with the brand now twisting the worldwide negative narrative to its favour and coming up with this deliciously stupid ambition. With that, I believe we made Rom use its tinier but quite efficient weapons to perfection”, stated Ioana Zamfir, ECD MRM Romania.