Behind the Work 238 Add to collection 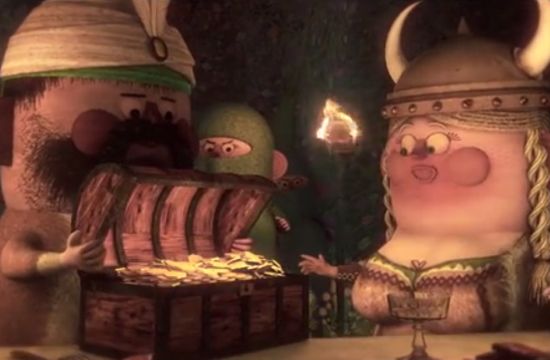 Do you ever find yourself pondering why you are here, right now? Call us odd, but we do. Which is perhaps why, aside from its glorious character design, animation, music and voiceover, Rok Predin’s latest short resonated with us so much. In ‘One Of A Kind’ the Trunk director has looked to lay out the idea that we’re all just a result of fate and fluke, but in such an amusing and well-crafted way that we reckon you’ll find you’ll find yourself watching it over and over. Rok spoke with LBB’s Addison Capper about this one of a kind trip through time.

LBB> What inspired you to make One Of A Kind and how long has it been in the pipeline?

RP> I’d had the idea for quite a while and knew very early on that it could be a fun film to work on. It took about six months, on and of, from the start of the production.

LBB> Can you tell us a bit about the narrative and what you wanted to portray?

RP> I wanted to communicate the idea that we're all just a result of unimaginable coincidences and chance. I wanted to show how each of us carries  in ourselves traces of numerous people and beings that came before us. How in a way we're all just the very latest piece in a long lasting puzzle, a link in a chain that goes back eons. That's why we chose the ironic title One Of A Kind - because in a way we're all very much the same.

LBB> On top of the main idea there are lots of mini narratives woven into the film. Where did the idea for those come from and how did you blend them into the wider idea?

RP> The main story of the film is so general and broad that it wasn't very difficult to find appropriate allegories in the details or in smaller sections. The script was written by myself and our producer Richard Barnett. And it was at the stage of scriptwriting that we polished all the sequences and decided on what actions and motives would be the best for the story.

LBB> The character design is absolutely fantastic and detailed. Where did you draw inspiration from? What kind of processes did you go through to get it spot on?

RP> I usually just jump into the software and see what looks best to me. I always try to create characters that are not generic, ready-to-rig and boring, but that have a certain stylised quality that makes them almost a little bit like puppets. I'm not interested in realism. I enjoy bringing to life characters that have their own stylised anatomy. That's why I always build custom rigs that can not be animated in a straight forward industry standard way. So in that sense I limit myself and have to come up with unique solutions for my animations. I do have to say that my rigs are not perfect and that I do sometimes wonder if going down such a route is a mistake.

I also have to mention my wife, Sara Savelj, who designed all the costumes and accessories for all the 70-odd characters. That made a real impact on the final look.

LBB> I love the changes in music as the film travels through different times. Who was behind that and why did you feel it should play such an important role in the film?

RP> We had this idea early on when we were thinking about how to give the whole piece more layers to read in to. We knew we wanted small hints in the score that would relate to the time periods that we were witnessing on screen. The whole thing then flew off in Daniel Pemberton's brilliant hands. The music he created for the film exceeded all my expectations.

LBB> Jim Carter narrates the spot. What did he bring to the final production that others couldn't have?

RP> Jim Carter's voice has an incredible range, and on top of that his performances are outstanding. Some people just have that charisma. After we recorded the voiceover I told him that he could've read from a phonebook and it would still sound like Shakespeare to me. He was our first choice and we felt very lucky to have him on board. And as for what he offered that others couldn't have, I think you only need to listen to his performance. It speaks for itself.

LBB> What were the biggest challenges that arose during the production and how did you overcome them?

RP> Almost every aspect of the production had a certain challenge, but I guess the sheer volume of the characters that needed designing was the biggest challenge - that next to the enormous render times. With the characters there were no shortcuts. I just needed to put my head down and start working. As for the renders, we used the new Team Render feature in Cinema 4D r15.

LBB> Can we look forward to anything else like this from you in the future?

RP> We already have our eyes set on new projects so by all means, stay tuned!