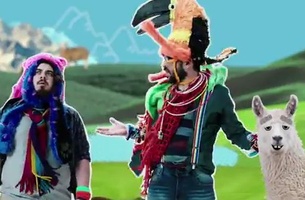 Undisputed heavyweight of the production world director Rocky Morton has come to town to shoot his very first commercial on Australian shores, collaborating with industry powerhouses M&C Saatchi, production company World Wide Mind, animation shop Sixty40 and post house Heckler.   The co-founder of MJZ (the Cannes Palme d'Or Best Production Company of the Year for the 7th year), Morton was invited to Sydney by Ben Nott and Will Alexander of World Wide Mind – the company that represents him in Australasia, with the task to bring to life an animated virtual world where all your holiday travel dreams spring to life for client Wotif via M&C Saatchi.

The humourous campaign titled ‘Wonderful Wotifia’ is an integrated live action and animation film that promotes the travel destination brand’s promise of “the world on holidays”. The quirky story centers on the journey of two characters as they go on a trip through a fantastical land of travel possibilities.

With overarching direction led by Morton and animation headed by Sixty40 animation director Mark Simpson, the campaign’s idealised travel world is not occupied with traditional travel moments or holiday stereotypes, but rather engages the audience with a collage of unexpected animated, photographic and live action regalia; including a giant beach babe, a glitzy karaoke scene, space llamas, singing thumbs and underwater fart bubbles.

“Wotifia was a challenging project – a hybrid of a commercial and a two-minute music video. I was presented with the theme song by SongZu, which was inspiring, and suggested to me a story about two mates exploring the Wotif site to plan an exciting holiday,” said Morton.

“It was my job to bring all the elements together to present the right tone for Wotif. It was a very brave client, which at all times was 100 per cent behind the project and allowed things like the fart bubbles to exist. Sixty40’s Mark Simpson is an extraordinary talent and secretly a Space Llama Lover. It was a jolly good experience working in Australia with World Wide Mind and I’ll definitely be back for more,” Morton added.

“It was a delight to work with Rocky and help develop extra layers of humour and some excellent support characters to the heroes of the campaign,” Simpson said. “Rocky and I had a great time making the animation work hand in hand with the live action, creating an animated reality supported by a host of awesome characters,” Simpson added.

Shot on an Arri Alexa, all live action elements were captured on a set with in camera effects, flying rigs, stunts, snow machines, cranes, interactive lighting rigs, and involved more than 70 set ups over a four-day shoot.

The Heckler team, led by executive producer Will Alexander and producer Michelle Parker used extensive pre-visualisation animatics so the talent could be seamlessly inserted into the surreal CGI world. Post and animation was turned around in six weeks with Heckler editor Andrew Holmes working closely with Morton to complete the edit.

Gary Dawson, M&C Saatchi Sydney creative director said: “World Wide Mind, Sixty40 and Heckler came to the table with not only bags of enthusiasm for the project but their unique offering of not only being able to bring in a world-class director, but inspirational animation and post production second to none made them the perfect partner to bring our world to life.”