Steeped in 45 years of star-studded heritage and artistic excellence, how does London’s iconic Park Village maintain its creative relevance in 2018? 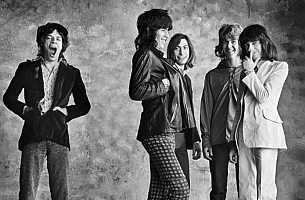 When filmmaker and photographer Peter Webb first opened a photography studio on the corner of London’s Regent’s Park, he was unaware of the legacy the former Victorian riding school would establish in the music, photography, fashion and filmmaking worlds. Now one of London’s most established and most iconic names in production, Park Village, is recognised for its rich creative heritage and for the many rock legends, film stars, and supermodels to have passed through its doors.

Now in its 45th year, it’s safe to say the production company has withstood the test of time, unmoved by turbulent finance and politics - not to mention huge social and cultural changes - in the UK over the last four decades. It is intriguing to learn how this company has passed down a generation while navigating the challenges that have faced production companies throughout the rise of the digital age.

Adaptability has always been integral to success in this industry, and no one knows this better than Park Village’s Managing Director, Tom Webb (son of Peter Webb). According to Tom, Park Village shapes its modern identity with one question in mind: What does a production company look like in 2018…and beyond?

As the Camden institution launches its expansive events arm under a unified offering, it’s not hard to see how their fresh model is a direct response to today’s complex demands.

Tom explains that as an up-and-coming photographer in the late sixties, his father discovered this iconic building by chance and saved it from demolition. From the get-go, star studded memories were being built at the site, with the Rolling Stones’ Sticky Fingers album cover being shot there. Incredibly, the negatives famously disappeared, only to resurface 40 years later!

Partnering with legendary Director Roger Woodburn and Producer Mike Stones, Peter expanded the photography studio into a production company in 1973. From there, Park Village went on to win the Palme D’Or twice and was recently given the accolade of being one of the top five most awarded commercial production companies in the past 50 years by D&AD. The legacy of craft developed during this era is one that is still being honed at the company today.

“Park Village is truly unique in being steeped in this incredible history and strong production legacy,” comments Tom, who first started out at the company as a runner in the early 90’s and has helmed the company’s operations as Managing Director since 2008. “Just as the company has successfully adapted for decades under my father’s guidance, we’ve striven to keep Park Village relevant to changing industry demands. Today’s production landscape is obviously very different to that of the 70’s and 80’s, so it’s imperative for us to reflect that whilst maintaining our distinctive identity. The past year has been particularly exciting for Park Village, as we’ve moved towards diversifying our services even further.”

What sets Park Village apart from the traditional production company is its unique offering. Complementing the industry’s move towards a more flexible working model, the Camden-based company has the capability to shoot productions with its director roster as well as service other productions in-studio and on-location. In the current climate of tighter budgets, this one-stop shop approach is more relevant than ever, both financially and logistically - and it’s a set-up that has proven to appeal directly to brands, agencies, production companies, and production service companies.

Modern names to have walked the famous studio floors include Robert de Niro, Penelope Cruz, Robert Downey Jr., Coldplay, Johnny Depp, Alex Turner, Cara Delevingne, and Winnie Harlow. The unique character of the space, superb central location, state-of-the-art equipment, talented producers, and opportunity to be a part of the building’s fascinating history continue to be a big draw for productions both local and foreign.

Amidst the facility’s modern metamorphosis, a key constant throughout the years has been Park Village’s steadfast commitment to crafting impactful work whilst discovering and nurturing new talent. Among Park Village’s roster are multi award-winning television director Harry Bradbeer, who directed BBC hit series Fleabag and recent breakout hit Killing Eve; Bennett Johnson, who earned a Cannes Lion Grand Prix for his documentary-music video about the Standing Rock protests, Hope Inside the Fire; and Favourite Colour: Black (aka Chris Turner), who has worked with brands such as Adidas and Jaguar, and won a Silver Arrow for Honda’s ‘The Evolution of Stunts’ campaign. Whilst Park Village’s rich table-top heritage is represented by the likes of highly regarded director Dominic Cyriax - who has created irresistible visuals starring Nigella Lawson and Heston Blumenthal - the company has also strengthened its music video offering, with the signing of UK Music Video Awards-winner Lewis Rose.

Constantly looking forward, Park Village’s trajectory shows no sign of slowing: “Being flexible and adaptive to our core has allowed us to foster creativity throughout almost half a century of industry change,” comments Tom. “Historically, Park Village’s success came from a more conventional relationship to production. To meet the changing needs of the industry, we’re constantly redefining ourselves and adding more strings to our bow. While the company still has craft at its helm, it’s diversified - adding different complementary offerings that ultimately work in harmony. Our unique combination of production, studio hire, and events space makes Park Village a truly exciting and ever growing creative hub.”