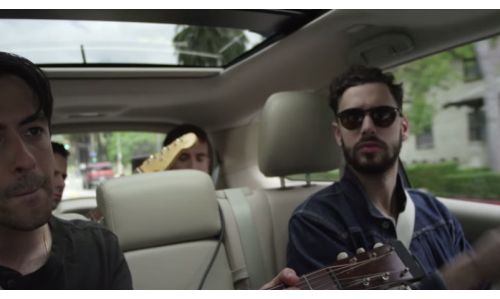 Some things in this life were made for each other. Like cars and music. It’s great rocking out to music while you drive, but what if your favorite bands were actually playing live in the car? Enter Nissan with the #OffTheStage Music Video Series.

Created to celebrate what happens on the road in-between shows, Nissan USA’s #OffTheStage features an eclectic lineup of artists performing intimate and innovative versions of their songs. The unique part? All the bands perform inside of a Nissan.

Showcasing up and coming road-hardy artists, viewers will get exciting and unique experiences as each band reinterprets one of their own songs. No big equipment, no mixing desks. Just stripped-back performances confined to, and liberated by, the interior of different Nissan models.

“#OffTheStage promotes one of the best parts of driving - listening to music,” said Erich Marx, director, Interactive & Social Media Marketing, Nissan North America, Inc. “Through this new series on iTunes radio, we are able to create an innovative music showcase featuring hot new acts and the versatility of Nissan products at the same time.”

The exciting #OffTheStage series kicks-off with LA-based rock group PAPA. Fresh off a world tour that included a critically acclaimed stop at SXSW, PAPA jumped into a Nissan Pathfinder with an amp to perform their stadium rock single “Put Me To Work,” yielding surprisingly intimate results.

“It’s always good to deconstruct your songs and cut the fat to get to the heart of the matter,” says PAPA’s drumming front man Darren Weiss.

The series launches on iTunes Radio in May and will continue through early fall with a new video releasing each month. Future acts include Swedish trio NONONO, indie rock darlings Local Natives, and synth-heavy funk ensemble Tuxedo.

Nissan USA was a launch sponsor on iTunes Radio when it launched in September 2013. #OffTheStage builds on that partnership and continues to push the Nissan global brand platform of Innovation That Excites.