Pd3, the experience-led creative agency, has launched a global online and in-store campaign for Victorinox, the global luxury Swiss brand... 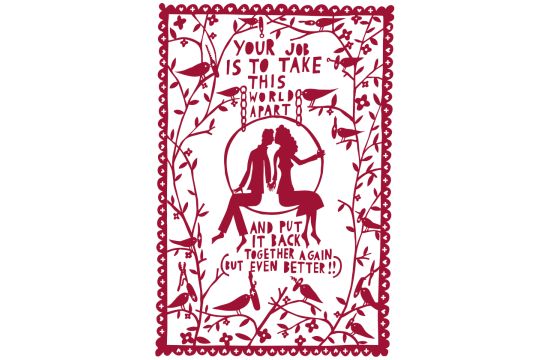 Pd3 creates Global interactive campaign for Victorinox with renowned British artist, Rob Ryan.
Pd3, the experience-led creative agency, has launched a global online and in-store campaign for Victorinox, the global luxury Swiss brand, to promote Victorinox Tomo – the brand’s first ever reinterpretation of its classic Swiss Army KnifeTM.
The Victorinox Tomo, (the Japanese term for friend or companion), is Victorinox’s first ever reinterpretation of its classic Swiss army knife and strikes a balance between Japanese design and Swiss precision - skillfully brought to life by Tokyo design house, Abitax.
VIctorinox has collaborated with renowned British artist Rob Ryan to launch the ‘Modern Art Cutting’ campaign – a take on ‘Kirigami’, the ancient and intricate Japanese art of paper cutting. Ryan was commissioned to create a unique modern art cutting for Victorinox Tomo, to form the main creative assets for the campaign. His piece of work features a ‘tree of life’ depicting how the Swiss army knife is shared and passed down from generation to generation, always ready and waiting in your pocket to help. The backdrop of the piece draws on the beauty of Swiss forests, inspired by Ryan’s trip to Ibach, Germany.
pd3 has designed the window display and visual merchandising for key stores in the UK, USA and Europe, as well as creating the global Victorinox Tomo website http://victorinoxtomo.victorinox.com featuring three downloadable modern art cutting stencils created by Rob Ryan, an interview with Ryan in his studio about his work, and  three modern art cutting master class videos, all exclusive to Victorinox. The campaign also includes a media partnership with Creative Review, and an in-store launch event on the 13th October.
To engage creative audiences across the UK, Europe and USA through social media, pd3 have created the #alphabunting generator. A unique paper cut artwork generator, which turns tweets and facebook messages into individual artworks using a bespoke alphabet, also created by Rob Ryan. Tweet at #alphabunting to have your tweet automatically turned into a modern art cutting, tweeted back to you from Victorinox Tomo and have a go on the ‘create your own’ page of the website click www.victorinoxtomo.victorinix.com
Cat Botibol, Creative Development Director at pd3 said: “The collaboration with Rob Ryan introduces the Victorinox Tomo to a creative audience, that maybe wouldn’t have been exposed to the brand before. The buy-in to the campaign from multiple territories is testament to the beautiful assets that Rob has worked with us to create from the UK. Everyone should get making their own art works with #alphabunting because it is great!.”
view more - Creative