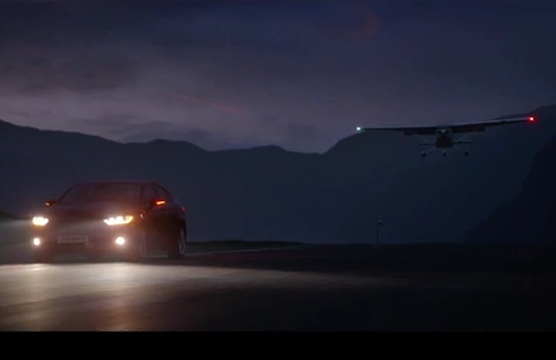 Ford Motor Company today released a new pan-European film for the all-new Mondeo created by Rob Cohen, the award-winning director of “The Fast and the Furious”.

The film shows a new Mondeo coming to the rescue of a small plane when the runway lights fail and a remote airfield is plunged into darkness. The Mondeo driver guides the pilot to a safe landing by racing to illuminate the landing strip with the model’s new Ford Dynamic LED headlight technology.

“The all-new Mondeo is packed with smart technologies that deliver everyday benefits to our customers, from helping drivers avoid collisions with vehicles and even pedestrians, to making  parking simple and hassle free,” said Roelant de Waard, vice president, Marketing, Sales & Service, Ford of Europe. “Our customers hopefully won’t need to help land a plane using Ford Dynamic LED headlight technology, but we believe they will appreciate the difference it makes in their daily lives.”

Ford first launched the advert on social media channels including Facebook, Twitter, Google+ and Instagram. The 60-second film can be viewed at this link.  A behind-the-scenes video also is available to view online here.

The film was shot on location in Sandane, Norway, by Cohen, who also directed, “DragonHeart”, and “The Mummy: Tomb of the Dragon Emperor”. The 60-strong crew – including a professional stunt driver, and a stunt pilot worked to produce the advert over five days.

“There’s no substitute for real. CGI can approach real but it can never achieve real,” Cohen said. “We’ve gone to great pains to film this commercial on camera. We had to be on our game. You have to shoot what for most commercials would be a full day’s work in two hours – that little window where there’s enough darkness to feature the lights and enough light to feature the car.

“We did the plane landing right over the car as an actual stunt and I think the audience will appreciate the fact that we really did it,” Cohen added.

The dramatic film, conceived and produced by Blue Hive, is part of a full 360 creative campaign.

“The new Mondeo is a game-changing vehicle, so it deserves to be showed off in a spectacular way,” said Karin Onsager-Birch, chief creative officer for Blue Hive Europe. “Rob was the perfect filmmaker to help us bring this action movie to life, making consumers reevaluate the way they think about the Mondeo.”