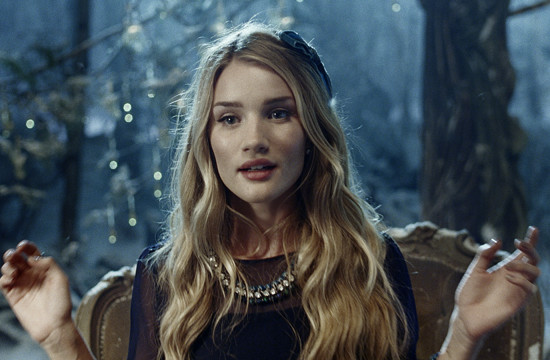 Prepare to be charmed by the beautiful Rosie Huntington-Whiteley and her own 'Toto' as she takes us on a whirlwind adventure through our favourite fairy tales, including Alice in Wonderland, Little Red Riding Hood, Aladdin and The Wizard of Oz. She is joined on her journey by the dashing David Gandy with a special cameo appearance from Helena Bonham Carter.

Using the end-line 'Believe in magic and sparkle', the film is set against ever-changing fantastical backdrops, including snow-clad forest and gingerbread houses, while showcasing M&S's range of lingerie, accessories, food and party wear available in stores this Christmas.

Mark Roalfe, Chairman and Executive Director, said: "Magic and sparkle is what M&S brings tot he nation every Christmas. This year's film is a beautiful fashion fantasy romp through our favourite fairy tales."

Created by Pip Bishop and Chris Hodgkiss at RKCR/Y&R and directed by Johan Renck through Black Label Productions, with a score by Guy Farley of Native Music Supervision, this is a treat for all of those who believe in a bit of magic at Christmas time.