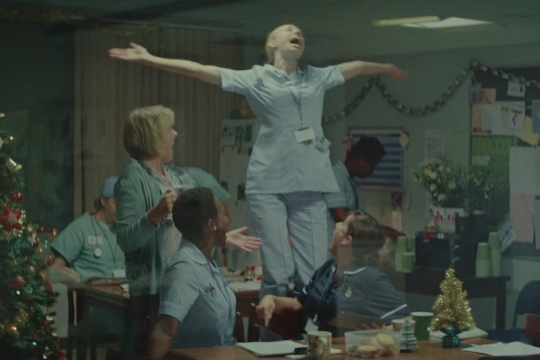 Despite having to work over the festive period, the "local heroes" are shown to be full of Christmas cheer and bursting into song, as they watch the film on their device.

The campaign uses the hashtag #PowerToTheFestive, and aired last night on Channel 4. Frozen is one of the films on Sky Movies this Christmas.

The one-minute spot by Rainey Kelly Campbell Roalfe/Y&R will also appear in 40- and 20-second cut downs.

Rupert Williams, the managing director at RKCR/Y&R, said: "We wanted to bring to life the joy of being able to watch Sky films and TV shows wherever you are this Christmas on Vodafone 4G.

"Singing along to Let it Go from the film Frozen does that in spades. The team that worked on the ad may never be able to get the tune out of their heads though."

Daryl Fielding, the director of brand marketing and communications at Vodafone, said: "Like many people across Britain, joining in with the Let it Go anthem inspires them and lifts their spirits."