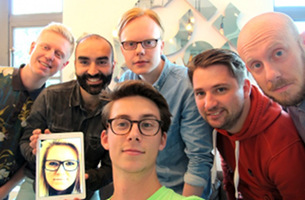 Rainey Kelly Campbell Roalfe/Y&R has hired seven creatives from across the industry, further strengthening the diversity and breadth of creative talent at the agency.

Psembi Kinstan, who joins RKCR/Y&R from GPY&R in Melbourne, has won multiple awards at international award shows, from D&AD to New York Festivals, and is Australia's youngest ever Cannes Lions winner. He was produced award-winning work for clients including Vodafone, Land Rover, Schweppes, Heinz and Mazda.

Enrique Reija Menendez comes to RKCR/Y&R from 180 Amsterdam, where he was part of the creative team behind the global brand advertising campaign for PlayStation, PS4 “This is for the Players”. Prior to 180 in Amsterdam, he worked in London for nearly six years at agencies including Mother and Havas.

The other new joiners are Carl Rets and Carl Cavallius, a creative team from Wieden & Kennedy Amsterdam and Alice Burton, a copywriter from Fallon, who has worked on a variety of accounts including Netflix and Liberty Foundation.

Mick Mahoney said: “These hirings demonstrate our commitment to bringing in bright, fresh, exciting and diverse talent to build RKCR/Y&R’s next generation.”