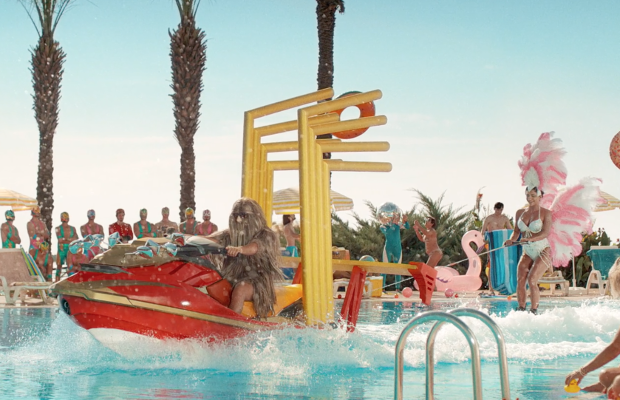 Taking more than one million customers away on holiday every year, First Choice is an important part of the TUI family, with its own distinct brand personality. Its latest multi-million-pound campaign marks a new direction for the First Choice brand, as it moves away from being the home of all inclusive and offers customers more package holidays than ever before.
The colourful and wildly, wacky imaginative creative treatment created by VMLY&R was brought to life by multi award winning director, Djawid Hakimyar at Partizan who loves to bring stories to life in a humorous way. The ‘Ridiculously good value’ TV ad first airs on Boxing Day during its premier of the James Bond blockbuster Skyfall and will reach almost 95% of UK adults.
Highlighting low cost package holidays the ad opens with a couple and their son relaxing around the swimming pool during their family holiday in Turkey. It’s a glorious, peaceful day and everyone is enjoying themselves. The parents discuss their disbelief at the price of the holiday, stating it is ridiculous at only £299 per person. The ad then cuts to the young son who blows into a large conch shell which summons the ‘ridiculousness’ to begin.
Backed with a catchy soundtrack of ‘In the Jungle’ by Tight Fit, we see a host of eccentric characters around the pool area – including a soaking wet Tiki Bar Drummer who emerges up from beneath the water rocking out on his melon drum kit, Cleopatra is feeding a ventriloquist dummy, a flying merman shoots out of a cannon and two sumo wrestlers are having a pillow flight whilst mid-air. The ad ends with the voiceover ‘Ridiculous deals need ridiculous adverts.’
Katie McAlister, TUI UK and Ireland chief marketing officer, commented: “I'm really excited about the changes to First Choice to modernise the proposition. We know that our customers really value having lots of options when it comes to choosing their holiday which is why for the first time, First Choice will now be offering more holidays than ever before. We’ve seen an increase in customer demand for both value and flexibility, including the trend for different holiday durations.
“The campaign creative does a fantastic job at championing loud and proud how ‘ridiculously’ good some of the deals will be and highlights the First Choice brand personality. We want people to have fun on their holidays and the humorous First Choice persona really shines through. The ad may seem weird and wacky but that is exactly what we wanted to deliver.”
She continues “First Choice is all about fun and embracing life to the full and this ad creative, alongside the memorable music which takes us back to childhood, captures this sense of euphoria. First Choice has always been a bold, confident, innovator with a swagger and sense of humour and fun. Our new ad embodies all of those qualities whilst highlighting our new low-cost package holiday brand proposition.”
Sophie Taylor and George Robb, creatives at VMLY&R said: “First Choice wanted to be loud and proud about their great value deals. So we went away, ate many cheeses, and dreamed up the idea: ‘Ridiculous deals need ridiculous adverts. Cleopatra used to be the Queen of Ancient Egypt so we thought there would be big PR value in getting her involved. Once she signed up, the merman, sumo wrestler and man made entirely of hair were literally biting our hands off to be in the ad. The music was key, too. We wanted something emotional, jolly and so nostalgic our gran’s would finally respect us. So that’s how Tight Fit ‘In the Jungle’ happened.”
Djawid Hakimyar, the director of the new ad, commented: “To get paid to work where other people are enjoying their holiday, have fun like on a school trip when the teachers aren't looking and create such an absurd pool party is as ridiculous as the deals at First Choice. It was so much fun to bring the idea to life and I only wish I had more luck playing bingo every evening at the hotel.”
The multi-channel media plan developed and executed by Mediacom consists of TV, Broadcaster VOD, radio, Digital OOH, print and a strong emphasis on social. The 30 second TV ad will first air during a prime spot on the Boxing Day showing of Skyfall. A mix of 30 and 20 second TV ads will be focussed on humorous programming slots including ITV’s Take Me Out, The Simpsons on Sky1 and a number of comedy films being shown across Sky Cinema and Film4. A 10 second cut down will be used across the First Choice social channels and a radio ad campaign will run in tandem with a print campaign. For the first time, we have YouTube Trueview and Bumpers in our media plan, which will feature alongside ‘ridiculous’ and funny video content.
First Choice Holidays will be offering thousands of great value holiday offers, across all board basis, including 1000s of Holidays under £299 per person, kids go free places and savings of up to £350 per couple or £700 savings on family breaks. Plus customers can take advantage of the low deposit scheme, with some holidays being secured with £0 deposits.