Impero created a series of surprise and delightful videos for the sausagemaker to celebrate teachers, nurses and lifeboat crews 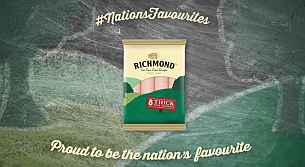 Since the appointment of lead digital agency for Kerry Foods Group, Impero has been working to align the brands online presence with their ‘Nation’s Favourite’ campaign – as launched in their 2017 TVC by Saatchi & Saatchi.

The work kicked off with the creation of a full digital strategy, a website overhaul, and their first content series on Facebook – and this year we’ve added a series of surprise and delight videos to give back to some of the nation’s favourite workforces, as part of Richmond’s ongoing ‘Nation’s Favourite’ campaign.

A series of videos were developed and filmed, in partnership with 3 Monkeys Zeno – starting with Gogglebox TV star Scarlett Moffatt surprising ‘nurses of the nation’ with chauffeur-driven limousine to a surprise party, celebrating and thanking them for their hard work.

Swimmer Rebecca Adlington surprised the ‘lifeboat crews of the nation’ in St Abbs, Scotland, with an at-sea helicopter drop of Richmond sausage baps, rewarding the amazing St Abbs crew for their endless hard work and dedication to the community.

JLS star Aston Merrygold pulled out all the stops, along with the pupils at a Lincolnshire primary school, to stage a surprise gig to recognise the hard work of the nation’s teachers.

Back in September 2017, Impero’s work with Richmond kicked off with the launch of a new website to align their digital property to their recent brand relaunch. Impero will continue to support Richmond’s ‘Nation’s Favourite’ campaign at a digital level throughout 2018 – providing strategic oversight, content creation and production – tying in with the rollout of their new packaging, product launches and overall repositioning.