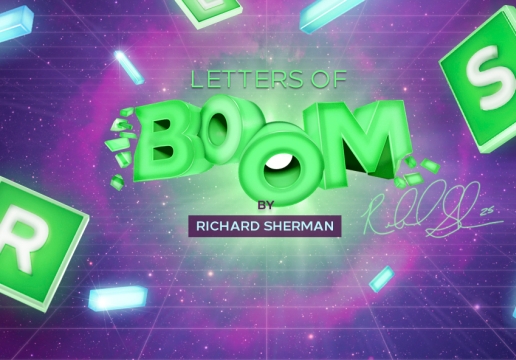 Super Bowl champion Richard Sherman of the Seattle Seahawks launches Letters of Boom, a simple, addictive word game that combines both the brains and brawn of the dynamic Pro Bowl cornerback.  Letters of Boom is available exclusively through the App store on iPhone for $1.99 at http://AppStore.com/LOB.

Letters of Boom challenges players to use smarts and speed to master fast anagramming, make strategic choices, and leverage bonuses for high scoring. In true Sherman form, the rules of past word games are thrown out the window. Game play features Bonus Letters, Multipliers and Alarm letters that add twists and turns that will satisfy both casual gamers and word game lovers alike.

“I’ve always loved word games, but there has never been anything out there that felt hard-hitting or extreme for me,” said Sherman. “I’m excited to be one of the first professional athletes to deliver an action-oriented word game.”

Developer Digital Kitchen worked closely with Sherman on creating all aspects of the game.

“We are excited to bring to life a mobile game that only Richard Sherman himself could imagine,” said Anthony Vitagliano, Executive Creative Director, Digital Kitchen. “His spirit, intelligence, and tenacity are all represented in the experience.”

Features of Letters of Boom:

Follow @LettersofBoom for news and updates, or for more information about Sherman, visit www.richardsherman25.com and follow @RSherman_25.

Creative Artists Agency (CAA) facilitated the partnership for Letters of Boom on behalf of its clients Sherman and Digital Kitchen.