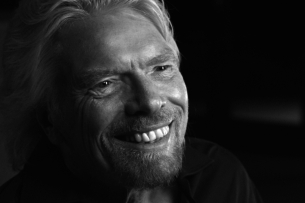 Richard Branson offers an emotional insight into his family history and business career in the launch film for Virgin Media Business’s ‘Pitch to Rich’ competition. ENVY have provided a full range of post-production services on the film, which is directed by Sundog Pictures’ Bruce Goodison.

‘Pitch to Rich’ is a new competition from Virgin Media Business that gives budding entrepreneurs the chance to pitch their business ideas to Richard Branson, with the ten best pitches winning a share of more than £1,000,000 in prizes.

The film, which aired on Channel 4 on Tuesday (24/03), was shot with the Arri Amira at 2k and was a full-service project for the ENVY team, who provided Grade, Flame and Audio work.

ENVY’s Vicki Matich, who graded the film, comments: “The brief from Bruce was to create a dark and moody feel to reflect the fear of taking the plunge in a new business. He shot the interview footage in colour on Necker Island but our grade was in black & white; a masterstroke which delivered great keys for the profile elements and skin tones. Bruce also wanted the landscapes to reflect the energy and power of nature, which then contrasted with the colour and emotion of Richard’s untreated family archive and, by his response, I don’t think he had seen this footage for a while’.

ENVY recently launched a new Advertising & Entertainment division which offers a compelling new creative proposition to meet the high expectation of their advertising and brand clients. The Advertising & Entertainment division adds to ENVY’s multi-award winning broadcast offering, bringing together a wealth of talent and experience that will benefit shortform projects, such as ‘Pitch to Rich’.

Rich Martin, ENVY Audio Designer, comments: “It was an exciting project to work on, and it drew on our interdisciplinary talents as both a documentary and commercial finishing house. It was good to bring a bit of drama to a traditional talking head interview piece, and the bold direction by Bruce Goodison meant that we had a lot to play with.”