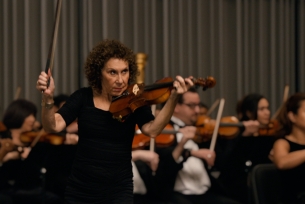 In another ‘out of the box’ advertising move by BNY Mellon Wealth Management, the firm is running a new TV spot featuring actress Rhea Perlman as a surprise concert replacement for  violinist and conductor Itzhak Perlman. The ad, created by TBWA\Chiat\Day New York, is a tongue-in-cheek metaphor about the importance of having the right expert managing your money.

The spot is Rhea Perlman’s first appearance in a commercial and is a new iteration of the firm’s "A Different Kind of Wealth Manager" TV campaign launched in 2014.

Recently described by Barron’s as a “quiet giant” of the industry, BNY Mellon Wealth Management is a leading wealth manager. BNY Mellon has been cited as one of the safest U.S. banks with over 230 years of experience.

The campaign, which includes TV, digital and social, will run through the end of 2015.

“BNY Mellon Wealth management is a different kind of wealth manager. Not only in the way they do business, but in how they speak as a brand,” said Matt Ian, Executive Creative Director at TBWA\Chiat\Day NY. “This spot conveys a key difference, in a different way: as a humorous twist on the often dry subject of money management. And the legendary Rhea Perlman is the icing on the cake."