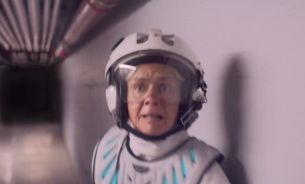 To promote Islandsbanki's annual Reykjavik marathon, ad agency Brandenburg enlisted directing duo Samuel and Gunnar, who are repped by Humble in the US, to direct the campaign. It came to life when two of Iceland’s most popular actors approached Islandsbanki looking to partake in the promotion of Reykjavik’s marathon as long as all their compensation went to the charity of their choice. Both actors will be partaking in the marathon as well.
Tasked with creating the campaign, the creative minds behind Bradenburg pondered over why people run and why actors run? The answer, people run for the health benefits, but when actors run it’s out of fear or survival. With this in mind directors Samuel and Gunnar contributed their talent by satirically recreated iconic running movie scenes and situations. The spot was filmed across 13 locations over the course of two days of shooting.
The spot aired June 22nd, during the World Cup in the time slot before Iceland’s second game. 57.4% of the population of Iceland (337,780) was tuned in during this and 100,000 people were watching using smart devices.
view more - Creative