Trends and Insight 279 Add to collection 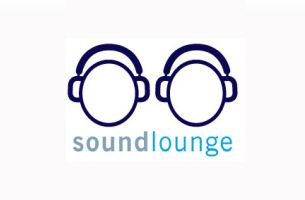 Marks and Spencer recently cancelled their playing of music in store. Full support goes to Pipedown for campaigning against repetitive playlists of music that have a limited number of tracks on a loop. Their other big complaint was the way sound or background music could be disorientating for people with hearing problems and noise sensitivity.

At first glance it would appear that research by PPL and PRS supports M&S’s decision, because from a retailers point of view too many people, who actually get out to participate in a bit of retail therapy, do feel forced to leave if they are not enjoying the music. Shoppers reported that they actually put down an item they have in their hands and leave the shop if they don’t like the music or cannot hear themselves speak!

And worse. If the music that is being played in a store, drives them so crazy, nearly 2/5 will not come back and ¼ will actively recommend others not to visit.

Putting that into ‘real money’, with the wrong music, the potential revenues are beginning to look like a revolving door. Say the average customer intends to spend £20 on a Saturday shopping expedition, (and that’s just about one sweater), if there are approximately 1000 people walking through the door, this would add up to a loss of £10,000 walking straight out!

However, as the research delved deeper, it all got more complicated and became a bit like the story of Three Bears. Too loud; nearly 44% walk out, too irritating -nearly 44% and just right- only just over 56% stayed to shop. 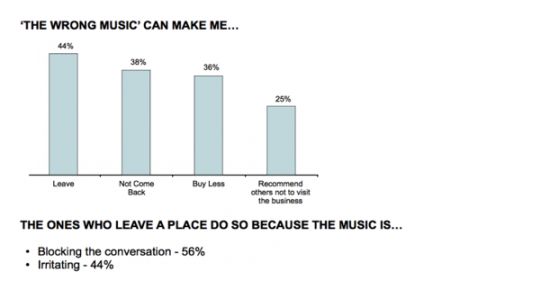 But could it be that there are other factors coming into play? It would seem after careful attention to design, store layout, the direction of in-store traffic, lighting, temperature, the decision to play music often comes as an after-thought and stores are often challenged by having to install speakers once everything else is in place in an existing store. Sound technology is becoming so sophisticated that not only can it can play music according to the time of day and literally by who is in the store. It is also capable of wrapping/isolating specific music to certain areas and could be used to actually assist the customer around the store.

Why is it when we know that music reaches deep into the psyche of the customer that music playlists are still being bought as ‘music by the yard’. Like a popular dress or coat music is a commodity where one size does not fit all stores.

In our 30-year-long experience consulting for retailers such as Fortnum & Mason, Debenhams, New Look, Pandora, we have found optimised music to have substantial positive impact on both sales and revenue. Over the years, our research has shown that the right music/sound will increase customer capture at the door, dwell-time, browse-time, basket size and overall spending, as well as boost staff motivation and productivity. But this is only true of optimised music: strategically sourced and curated playlists that reflect the brand guidelines and designed specifically to enhance the shopping experience. Ideally too this optimised music will complement each store’s environment and importantly speak directly to the audience walking in through its doors.

Music for the retail environment is not always about what is most popular or what is trending. It is about creating an ambience that is relaxing and conducive to encouraging the customer to ‘linger’ longer and should ideally reflect the values and personality of the store itself. This requires a strategy and clear briefing before any money is spent on execution.

The good news is for those stores who have got the music right, a whopping 85% of people interviewed believe the shopping experience is more relaxing when music is being played and an increase in linger time of up to 17%. Music can only do so much, after that it is up to the merchandise, the staff and the store itself to secure the sale.