Research Shows a Third of Olympic Sponsors Failed to Get Recognition

According to the Opinium research, six out of twenty brands failed to gain noticeable recognition

Despite a huge amount of expenditure on brand sponsorship of the Rio Olympics, there is little sign of this boosting brand awareness through association to the Games, according to Opinium Research’s brand tracker study.

As the hugely successful GB Olympic team fly back to home ground, Opinium Research reveals which brands have seen the most success from their sponsorship of the Games. Opinium surveyed UK consumers before, during and after the Olympic Games to track brand recognition in association to the Olympics. Interestingly, Adidas pipped Coca Cola to top the ranking of brand most associated with the Olympics; other success stories include Omega, Muller, dfs, Deloitte and Dow.

However, eight out of 20 of the brands polled remained in the same ranking, while six brands, such as Coca-Cola and BP, saw their association to the games decrease over the course of the event, losing out to other sponsors.

Steve Looney, Head of Brand and Communications: “Compared to our tracking of Euro 2016, our brand league table for the Olympics has remained fairly stable with few brands being able to capitalise on connections to Rio 2016, or the ultra-successful Team GB. dfs is sitting pretty, with a nice surge up the table from 17th to 13th, which is great news, but despite a phenomenally successful games for Team GB compared to a dismal Euro 2016s for England, brands found it easier to cash in during tournament and so football looks a much stronger commercial bet for brands in terms of driving awareness.” 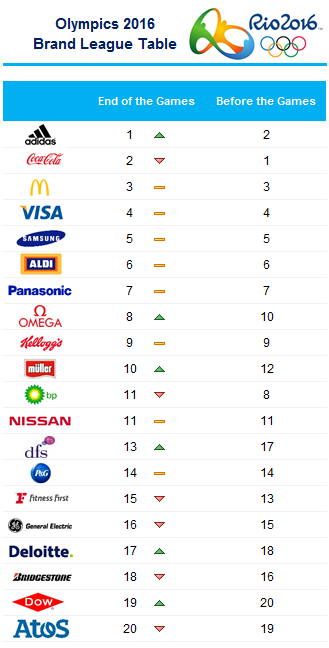