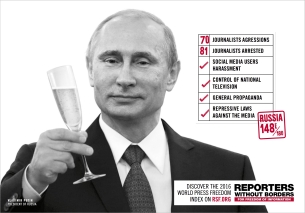 On the occasion of World Press Freedom Day, Reporters Without Borders launched 'Great year for Censorship,' a campaign denouncing the devastation of freedom of the press in twelve countries, whose leaders can boast having muzzled information.

Newsrooms attacked with grenades (Burundi), journalists getting fired over a tweet (Turkey), heavy propaganda (China, Russia, Eritrea ...), a blogger sentenced to prison and whipping in a public place (Saudi Arabia), or even the creation of military camps for journalists (Thailand) ... These are just some examples of what journalists experience throughout the world.

For the fifth year, BETC Paris supports RWB by producing their campaigns on a pro bono basis.