THE WEAPEN, made from fired-off bullet casings, symbolises journalists killed in pursuit of information 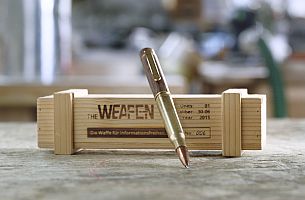 All around the globe, journalists are victims of violence. Just doing research about authoritarian regimes or organised crime can be life-threatening. In 2015, 144 reporters were killed. And with their lives, the principle of freedom of information has been lost.

To set an example against the violent suppression of freedom of speech, Reporter without Borders (RWB) and the creative agency DDB Hamburg developed THE WEAPEN – the “weapon” for freedom of information. At the beginning of 2016, 144 limited edition pens were produced – symbolising the 144 journalists that were killed pursuing stories in 2015. The pens were made from fired-off bullet casings: the bullets are mounted, engraved and stored in ammunition boxes by hand.

THE WEAPEN is available in the RWB online shop and 100% of the proceeds will be invested in RWB projects.

Renowned journalists like Giovanni di Lorenzo (Chief Editor, Die Zeit), who was voted as Germany’s second most important opinion leader by GQ in 2016, Georg Mascolo (Head of the Reasearch Cooperation of NDR, WDR and Süddeutsche Zeitung), Peter-Matthias Gaede(Journalist, Gruner + Jahr), Jörg Quoos (Chief Editor of the FUNKE editorial team in Berlin),Gemma Pörzgen (freelance Journalist and author) and Jonas Wresch (freelance photographer) have already supported the project by using the pen as a tool for the fight for freedom of information. The thoughts they wrote down with THE WEAPEN are now published as CLPs, print and online banners and are shared on social networks. They describe what personal freedom of information means to them and why they think it is in danger. 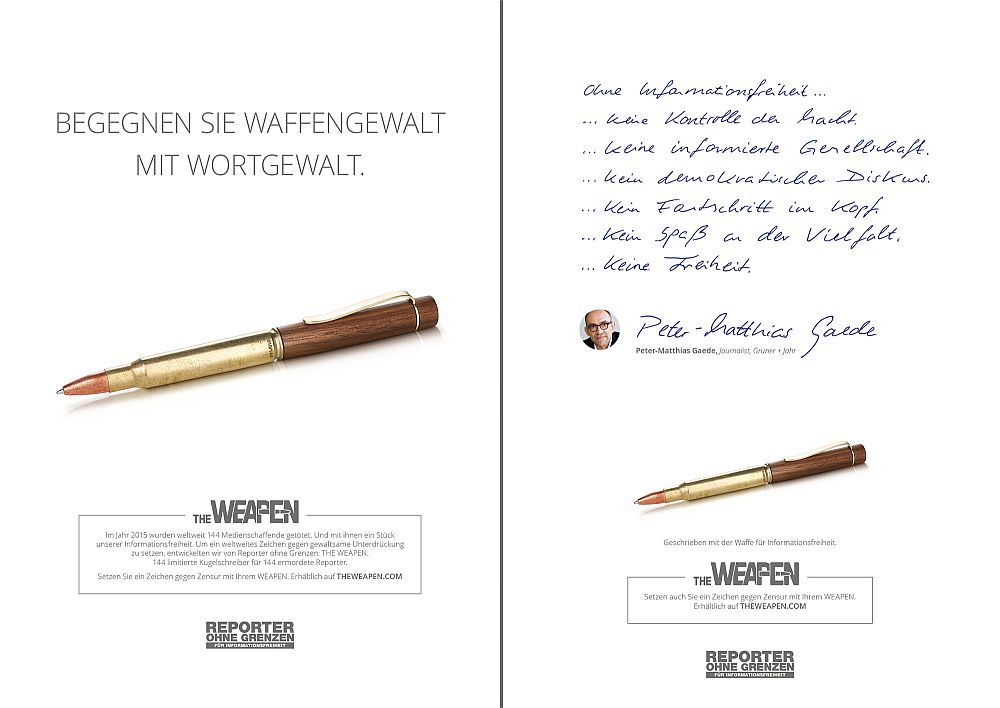 Quoos puts it this way: “We need to fight for freedom of press on a daily basis – because it’s much more dangerous to tyrants and dictators than any weapons, boycotts, or resolutions…” And Di Lorenzo writes: “Many people now spend much of their time in a parallel universe online and are trapped there: they only obtain information that confirms the opinions they already have. Independent, boldly investigative, transparent media are more important than ever before when it comes to dispelling rumors, conspiracy theories, and disinformation.“

“THE WEAPEN is the proof – that also turned into a product – that the pen is mightier than the sword. By purchasing it, you not only support freedom of information, you can and should also take action in its name”, as Fabian Roser, Executive Creative Director at DDB Hamburg, explains.

You can find more information on the projects that Reporters without Borders support with the proceeds of the sales of the pens on the campaign website: www.theweapen.com/english.