Refuge is working with creative agency, BBH, on World Suicide Prevention Day to raise awareness of this shocking reality with an OOH Campaign 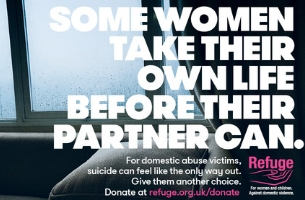 “Suicide must not appear the only escape for some victims of abuse” urges Refuge, the national domestic violence charity, on World Suicide Prevention Day.

“Around three women a week are thought to take their own lives to escape domestic abuse. That figure exceeds the number of two a week killed by abusive current or former partners. Yet suicide figures for women escaping abuse are little recognised. This is of grave concern,” said Sandra Horley CBE, Chief Executive of Refuge. “There must be greater understanding of the risk of suicide among victims of domestic abuse and increased provision of specialist services for them.”

In one of the largest studies of its kind, and the first in the UK, staff from Refuge and the University of Warwick undertook a ground-breaking research project, based on the experiences of more than 3,500 of Refuge’s clients, with the aim of bringing much-needed awareness and understanding to this issue.

The study found that:

The research showed the level of support for survivors from professionals and external agencies was crucial; long delays in obtaining support had the potential to exacerbate difficulties. Victims also needed adequate time to disclose the full impact of their abuse and in a suitable environment to ‘tell their story’ at their own pace. Cuts to external services had left specialist domestic abuse staff trying to fill the gaps.

Refuge calls on the Government for a commitment to sufficient, specialist services for all survivors of abuse, particularly those who are so distressed that they have considered suicide.

“Nobody experiencing abuse must be left to think that suicide is the only way out,” said Ms. Horley.  “We must send a message loud and clear to women experiencing psychological harm that they are not alone, there is support out there.”

Refuge is working with creative agency, BBH, on World Suicide Prevention Day to raise awareness of this shocking reality for many victims of domestic abuse.

On Monday 10th September, two billboard screens across London will be drawing attention to the risk of suicide amongst women facing domestic violence.

"Domestic abuse is something that happens behind closed doors, something which is often invisible to the public. It is vital in any way we can to bring this important message, and the work that Refuge does in helping victims, out into the open. Especially on a day such as World Suicide Prevention Day," said Nikki Lindman, Creative Director, BBH London.