The luxury automotive brand selected Patterson to write a review like no other about the LC, exclusively for Australian audiences 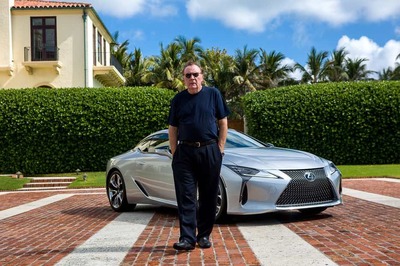 Lexus Australia has announced a collaboration with one of the world's foremost authors - and former executive creative director James Patterson (pictured left) - to launch its all-new Lexus LC coupe via M&C Saatchi, Sydney.

Patterson is one of the world's best-known and best-selling authors, with more than 325 million of his books sold globally. He is ranked #1 on Forbes' highest paid authors and was also #3 on its Celebrity List. Patterson's works have also been adapted for television and film including Along Came a Spider, Kiss the Girls and Zoo.

Lexus Australia tasked Patterson to employ his engaging and descriptive style to craft a review of the LC 500 - a flagship luxury coupe that represents a progressive new direction for Lexus.

The LC is also available with a next generation Multi Stage Hybrid System that redefines the hybrid driving performance in the form of the LC 500h model.

Patterson, whose carefully crafted review brings to life the features of the vehicle for all enthusiasts, said of the experience: "At first I wondered why Lexus chose me to review the LC 500. But after one drive, I realise a car like no other, needs a review like no other. I hope it's as breathtaking as any of my best-selling thrillers, because the LC 500 deserves all that and more."

Michael Canning, executive creative director, M&C Saatchi, says: "The Lexus LC 500 automotive review deserved a level of writing to match the vehicle's level of performance. A collaboration between Lexus and James Patterson was the perfect way to bring the experience of the LC to life, as both a brand and an author who place such high importance on their respective crafts."

Vin Naidoo, corporate manager of marketing operations and sales, Lexus Australia, says: "The new LC coupe signals a new chapter for the Lexus brand as we evolve beyond a luxury automotive manufacturer to a global luxury lifestyle brand. We're delighted to have James Patterson craft his interpretation of the superior driving experience in his inimitable style."

The review will be used only in the Australian market and can be viewed here.