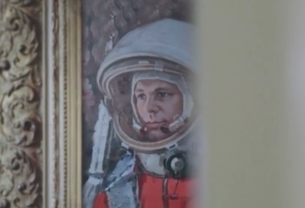 Rene Nuijens has recently shot a short film which is part of a festival and exhibition at Regio Emilia. The film "Yuri on the phone" was conceived and shot last year, with it being finished just in time for Yuri Gagarin's 50th anniversary of his flight into space.

'Yuri Gagarin' is part of the exhibition entitled: 'Terra Effetto' (Earth Effect) and will be shown until the end of the festival.