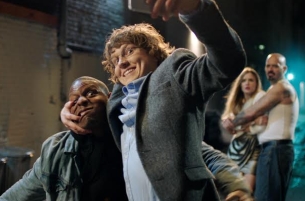 Remy Cayuela’s latest commercial is the centre of an exciting new campaign by Parisian agency Buzzman. Shot for Belvita and Tassimo through Frenzy, Remy presents a cinematic action-comedy showdown on the streets of LA.

In it we meet Jean-Francois, both an unlikely hero and unpredictably lithe fighter who comes to the rescue of a screaming damsel in distress. After besting his gang of opponents with a leg-whirling frenzy, he leans in for his reward but at the crucial moment Jean is snapped back to reality by his alarm clock, leaving himself and his audience yearning for 5 more minutes sleep.

‘I wanted to literally plunge the audience in a Hollywood superhero movie and then create a crescendo in the comedy and the absurdness.’ Comments director Remy Cayuela, ‘When working on the fight choreography I had in mind the classic Spielberg action movies such as the Indiana Jones saga where he always managed to inject humour into action sequences. This was a great inspiration for balancing cinematic shots and comedy elements. The idea we had was to build up the comedy step by step until reaching a climax where the absurdness takes over. We've been inspired by lots of American slapstick comedies (Hot Shots, Ben Stiller's films, Jim Carrey's films). We employed a few different tricks and the leg was one of the best as it was quick and the humour was instantaneous. It was definitely very funny to shoot too.’

‘The only challenge we came up against was shooting the entire commercial in one night and shooting fast enough in order to get all the scenes we wanted. The post-production was particularly smooth and fast on this one. We worked very closely with the agency so everyone was on the same page since the very beginning, which made things easier.’

An ongoing digital campaign from Buzzman surrounds Remy’s film, which invites audiences to submit what they would dream if they had an extra 5 minutes in the morning. The public can vote on their favourite and the most popular dream will be made a reality by Belvita & Tassimo.

On the topic of the campaign and its brief, Remy explains, ‘Buzzman are famous for their great comedy based concepts and their skills to do incredible viral campaigns, so when I first read the script I knew exactly what they were trying to achieve.’

‘It was actually the first time I have worked with Stéphane List, Antoine Moittié (the creative team) and George Mohammed-Chérif (Buzzman creative director).

However, we quickly noticed that we were sharing a lot of common references and taste for comedy and movies. It established a great base for us to work together closely. We were all extremely passionate about the project and I think we all pushed to achieve a film we would like to watch as an audience.’

Director: Remy Cayuela (Represented by Park Village in the UK)