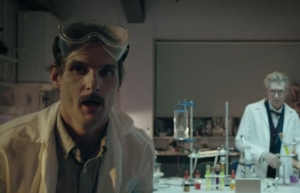 Cayuela blurs the lines between science and fantasy in this promo. Having developed a unique formula in their lab, the film is shot as ‘found footage’, recorded by a professor and his assistant in the aftermath of some beta testing. In his search for an elusive youth elixir, the professor becomes the formula’s first human trialist.

Over the course of his week-long ‘Koala Solution’ trial, the professor rolls back years and sees his physical capabilities taken to unbelievable heights.

Asked what inspired him, the Director says ‘The idea came directly from the name of the track. Koala inspired in me this mysterious solution that could enhance human skills, but behind every discovery we have a beta tester who is crazy enough to try it!’

Remy adds ‘The shoot was as intense as the pace of the track. It was a long one-day shoot, so I’d like to thank the amazing crew I had who all contributed to making this funny piece possible.’

Koala was produced by Sarah Tognazzi for Able & Baker, shot by Patrick Meller and commissioned by Andrew Law at Parlophone.

Remy recently collected the Vevo Must See Award at the 2014 UKMVAs for his Wilkinson ‘Afterglow’ promo, adding to his first prize at this year’s Young Director Awards.

Able&Baker – which forms a part of Park Village – boast a roster of both experienced and fresh young directors who specialise in music videos and content.