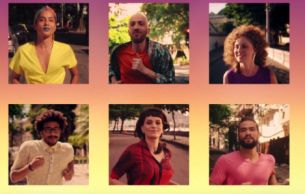 On the eve of the Olympic Games opening ceremony in Brazil, Skol and F/Nazca Saatchi & Saatchi announced an interactive music video directed by Vincent Morisset.  Skol's role for the Olympic Games: to be the host for a big party.

Skol Delegation is a 'Dream Team' that will offer the best parties during the biggest sports event in the world. Skol Delegation is the concept chosen by the brand for the Olympic moment, with the aim of recruiting Rio 2016 'party athletes'.

Premiering after six months in production, ‘Chariots of Fire’ is the official video clip for Skol Delegation. It could have been an ordinary film, but Skol transcended the limits of partying and put together a team to provide an unprecedented interactive experience. Go to this link to remix your own music video.

The brand joined F/Nazca Saatchi & Saatchi, Google, AATOAA (Vincent Morisset’s production company) and DJ Omulu (who remixed the theme song), to combine art, entertainment and technology and launch a platform that, for the first time, allows for six videos to be simultaneously shown on a cell phone.

The mixed experience has the logic of a game and stars six members of the Skol Delegation, people who want to live the Olympic Games Rio 2016 as a great moment of celebration. By clicking on any of them, users trigger sounds and effects in the song that enter the beat giving it the user’s unique and personal touch. The idea is for characters to have fun until daybreak; thus, at the end, the three most clicked athletes watch the sunset on the beach and are awarded with Gold, Silver and Bronze medals. Each interaction generates a specific result, and the project offers 36 different endings to the story.

"We want partying to go beyond Rio de Janeiro and everyone to enjoy the Olympic Games in a unique way. Those willing to do that, no matter where they are, will be part of the Skol Delegation. That's why we launched a challenge for Google to create a single, interactive platform and provide unique fun at the palm of your hands", says Bruna Buás, Manager for Olympics at Ambev.

For Theo Rocha, Creative Director of F/Nazca Saatchi & Saatchi, "experimental projects such as this, which combine technology, music and creativity, are powerful allies when boosting the concept of a brand."