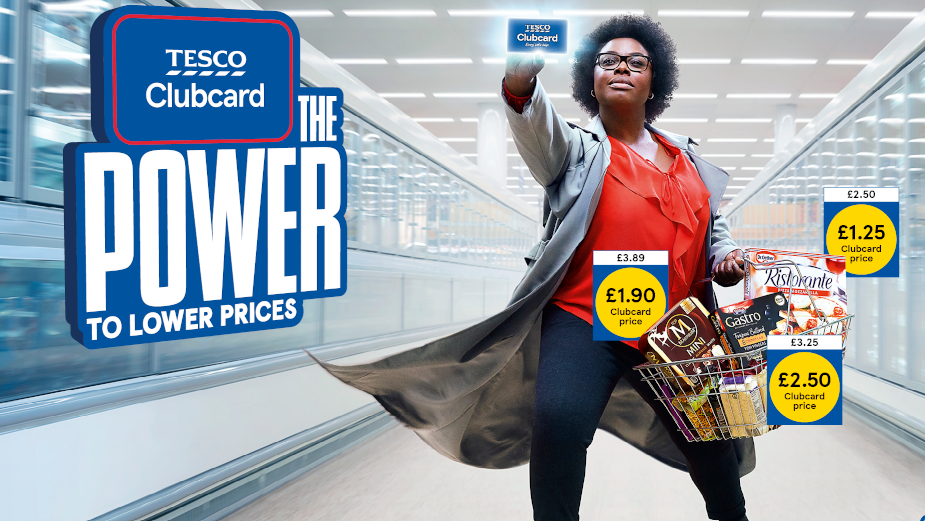 Tesco has today announced that it will offer exclusive savings to loyal customers and lower even more prices, giving customers great value under one roof. To mark the announcement of the new ‘Clubcard prices’ offering, Tesco has launched a fully integrated campaign highlighting the value customers get for being a Clubcard holder.

The campaign, created by BBH London, features a series of films in which a customer is unassumingly wandering the aisles of a Tesco store, Clubcard in hand. The customer soon realises the card carries more power than she had previously realised, zapping products in store and instantly lowering prices. As if by magic, the Clubcard has morphed into a powerful money-saving wand. The series of three fantastical films, which launch over three weeks, dramatise the superpowers that come with being a Clubcard holder. As well as lowering prices of products in store, the card gives our customer, Gillian, the power to fly and cast spells, culminating with the end-line Tesco Clubcard: The power to lower prices.

The full campaign spans TV, out of home, print, radio, social and digital. The first TV spot in the series launches today, Tuesday 15th September during Emmerdale, and others will roll out throughout the month. The films were shot by the award-winning directors Dom & Nic of Outsider Films and media was planned and bought by MediaCom.

The new ‘Clubcard Prices’ rollout is the first of its kind amongst all major UK supermarkets and offers exclusive deals to Clubcard holders, lowering prices on familiar branded and own brand products. From Tuesday 15th September, shoppers will be rewarded with lower prices on some of the nation’s favourite frozen brands such as Ben & Jerry’s, Birds Eye, and McCain. Deals in other product categories will launch in the coming weeks.

With value for money becoming increasingly important and customers saying fair and competitive pricing is their principal consideration when shopping, Tesco is focusing on offering simple, low prices for everyday items. The move will also help those customers who want to spend less time shopping around for deals.

Alessandra Bellini, Tesco Chief Customer Officer, said: “Clubcard Prices will feature across stores, every week, as a way to reward our customers for their loyalty. By scanning their Clubcard app or tapping their Clubcard, customers and colleagues will access hundreds of exclusive deals on familiar branded and own-brand products. We are excited to make Clubcard even more valuable and bring this innovation to customers with an engaging campaign which helps Customers feel savvy and in control.”

Clubcard Prices were first introduced as part of Tesco’s Centenary celebrations in 2019 with the ‘Prices that take you back’ campaign which features fun and iconic cultural references from the last decades, such as a 70s roller girl and 60s Mods on Mopeds shopping in a Tesco store.

Today’s announcement builds on the introduction of the Aldi Price Match earlier this year, as well as significant investments that have been made in the price and quality of the great value Exclusively at Tesco brands.