Relax and Recharge with This Whimsical New IKEA Ad 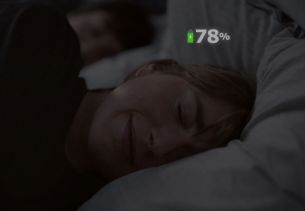 Born out of a collaboration between CZAR’s Floris Kingma and Havas Lemz Amsterdam, the latest IKEA campaign highlights the importance of a good night's sleep and being 100% recharged in the morning. Havas created the concept in hopes that the viewers will understand why a good night’s rest is important and how they can improve the quality of their bedroom using IKEA products.

The film kicks off with a sleep-deprived woman trying to put her baby to sleep while her partner helps with getting ready for bed. The story continues, narrated in a poetic way as the film shows the progress of the two women’s energy levels. As the couple sleeps, a battery appears as a metaphor for recharging. The IKEA set starts to assemble itself - tidying things up. The energy bars keep rising as the night paces away and the sun starts to rise when the baby finally wakes up, revealing her cheerful self.

The campaign brief was to highlight IKEA’s established position as a bedroom expert and CZAR narrowed the storyline, as advised by the client, while adding imagination to the script and presenting the bedroom scene in a mysterious, whimsical way. CZAR and Havas Lemz used a lot of different light elements in this film to deliver a warm atmosphere to the viewers - the focal point of the lights is also shown through the time development as the night slowly turns into morning.

CZAR Director, Floris Kingma said: “My work is usually comedy-based but this time I had to create a simple film that tickles imagination and has a calming effect. I wanted to add a personal touch to the film and make it more humane, so I paid great attention to the casts and incorporated modern romance into this simple yet eerie film. Getting the VO to have the right tone of voice was a challenge. I wanted it to be poetic and rhythmic without being too overpowering. I also want the attention to be shifted towards the VO rather than the couple - I wanted to portray them as a normal couple, which they are. In the end, I am grateful that Havas gave me the opportunity to create this film and I am really happy with the end result.”