Reel FX Creates VFX and Titles for Richard Linklater's 'Everybody Wants Some!!' 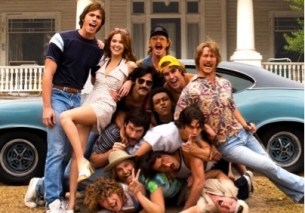 Reel FX completed 27 visual effects shots for the film in addition to the creating the opening titles, main-on-ends and end crawl. Everybody Wants Some!! is set in the world of 1980 college life, and blends sports, comedy and nostalgia as it follows a group of friends on the Southeast Texas State University baseball team  as they navigate their way through the freedoms and responsibilities of unsupervised adulthood and prepare for the best weekend ever – the last weekend before college begins.

Prior to the commencement of filming in Bastrop and Austin in early 2015, Producer Ginger Sledge contacted Reel FX to oversee the film’s visual effects, which included a kitchen ceiling bulging from the weight of a water bed, set extensions, background replacements, wire removal and additional cleanup work to transport modern-day Austin back to 1980. Sledge had previously worked with Reel FX on films such as Parkland, Bernie, and As Cool as I Am.

Notes Reel FX Executive Producer Pete Herzog, “This was such a fun project to be involved with.  Working with Ginger and the Texas crew was a true collaboration from the start. For the opening titles, I was inspired by both the film’s cassette logo, and the memories of my youth, which ranged from collecting hundreds of blank cassette tapes and hand-drawing their labels, to the musical generes of that time, to the graphic design of the 60’s, 70’s and 80’s. Richard’s script was both hilarious and nostalgic and of course we wanted all of that to come across. After going through dozens of  type variations we  found the perfect hybrid of all of our influences  - we think it’s a great way to bring audiences into the film.”