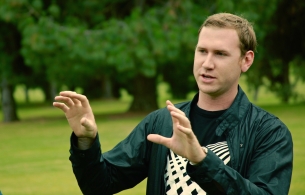 Digital studio Reel FX, Dallas/Santa Monica has signed director Elliot Dillman for U.S. commercial representation. With a diverse directorial background spanning commercials, branded content, music videos and multi-camera live events, Dillman has a natural talent for honing in on the broad scope of a project to deliver dynamic footage that enhances the storytelling. He has worked on national campaigns for top agencies including GSD&M, CP+B, Leo Burnett, Y&R and BBDO, among others. His directorial sensibilities have earned him awards and nominations for Cannes Lions, Addys and Webbys for his work for top clients including Dominos Pizza, Pacifico Beer and Kraft Mac and Cheese. Prior to signing, Dillman collaborated with Reel FX on a number of projects, including a recent spot for Hasbro.

“Elliot is an accomplished director, gifted at integrating live action, graphics, and animation, who excels at bringing out the best in talent,” Notes Reel FX Executive Producer of Live Production Steve Johnson. “Having grown up in the commercial industry, he’s been a storyteller from a young age. I am confident that he will be a major talent at Reel FX as we expand and develop our live action and VR divisions.” Adds Dillman, “It’s very exciting for me to be part of such an admirable studio, and to work amongst the extremely talented and innovative folks here at Reel FX. I’ve always been a big fan of their work, and I’m thrilled to officially join the roster.”

Dillman grew up on sets. As the oldest son of Emmy-winning director Ray Dillman, he was regularly working as a PA from age 12 on, for top production companies including Gartner Films and MJZ. While studying at Loyola Marymount University’s esteemed School of Film and Television, Dillman began his directing career with multi-camera live concert shoots for the ESPN Summer and Winter X Games, staying with the X Games for four consecutive seasons. After graduating, he primarily directed feature film tie-in spots for Sony Pictures, Warner Bros. and Paramount Studios. He also directed a number of music videos at this time for bands such as Pennywise, Strung Out and Death By Stereo, as well as helming national advertising campaigns for such top brands as the Walt Disney Company and Royal Purple Motor Oil.