The mooted ESL took a kicking from fans and brands and highlighted underlying frustrations with the business of football. Fans from the ad industry tell Laura Swinton and Addison Capper what we can learn 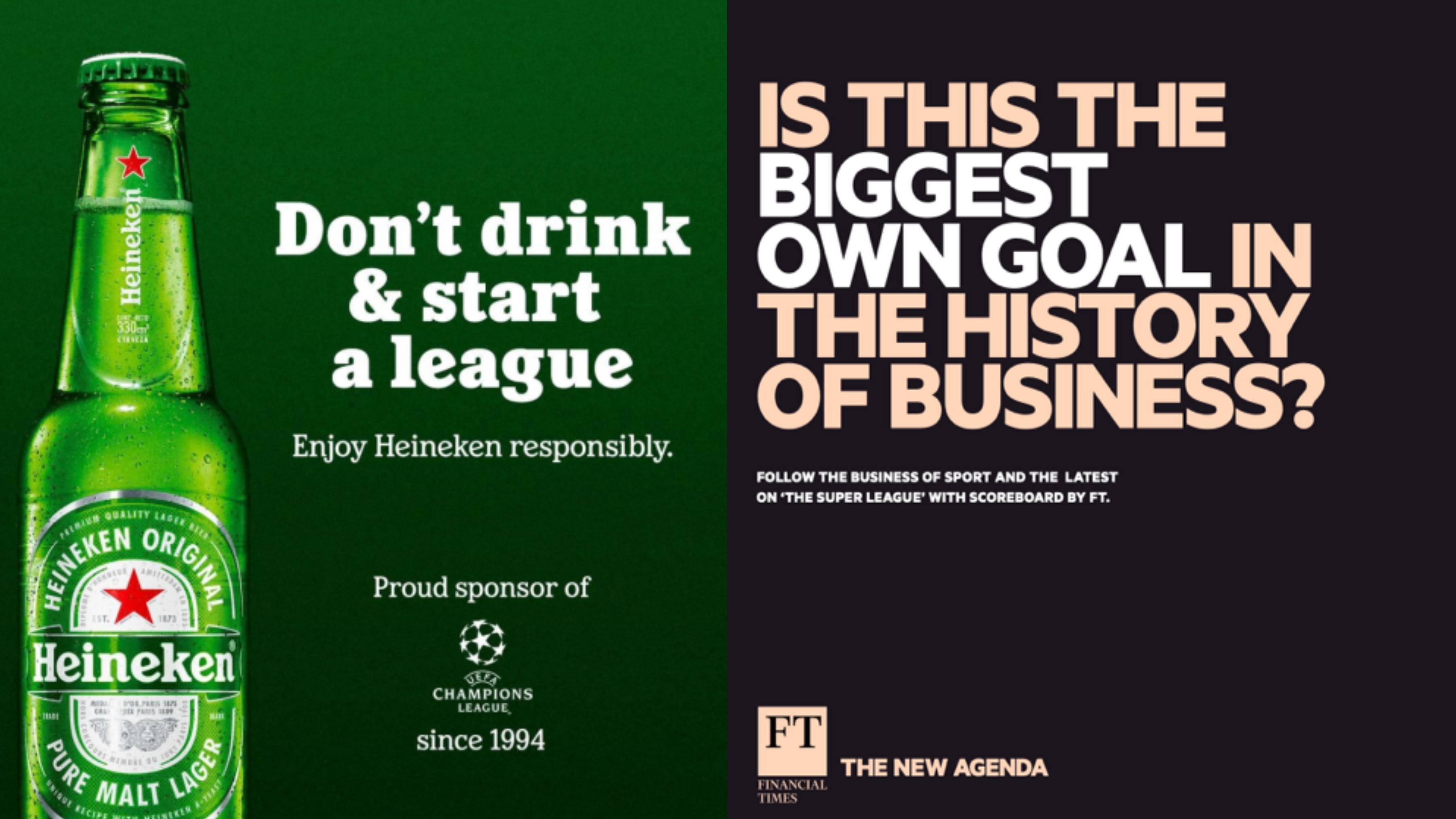 It’s been quite the week for football fans. On Sunday night, a cohort of the wealthiest teams across Europe announced plans for a new mega-competition that would take on the continent’s UEFA Champions League, reduce the likelihood of pesky, plucky challengers disrupting the chance for big name matches, and guarantee 12 founders a permanent place in the competition with no fear of relegation. Those founding the league would argue that this Super League would shore up profitability – Real Madrid President and one of the ESL ringleaders argued it would ‘save football’. But with no possibility for relegation, detractors argued it would foster a stagnant and uncompetitive environment, would distract from and undermine local leagues and would benefit the wealthiest- not the best - clubs.
The immediate backlash from fans, players, managers and pundits was quite something to see, with politicians like the UK’s Boris Johnson jumping on an opportunity to make hay and TV presenter James Corden making an impassioned speech to his probably less-than-invested US audience. (Indeed, as comparisons were drawn with the US NFL, American fans began to wade in on social media in defence of the idea). 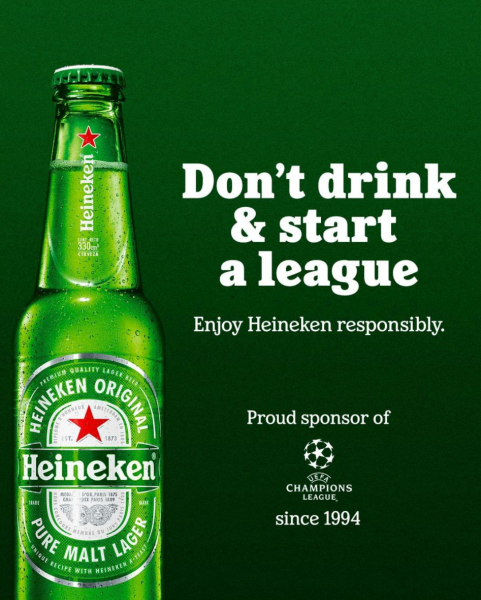 Brands too, joined in the kicking. The Financial Times’ responsive print ad from Brooklyn Brothers asked if the ESL was ‘the biggest own goal in the history of business?’ And UEFA Champions league sponsor Heineken clocked up over 15,000 likes in a few hours with an Instagram post from its dedicated Publicis Groupe agency Le Pub that read: “Don’t drink and start a league”.
By Wednesday morning, the six English Premier League teams that had agreed to join withdrew and soon after the whole initiative decomposed completely.
When it comes to insights to apply to the advertising and marketing industry, there’s quite a deep bench to pick from. Never underestimate the power of fans, for one thing. Indeed, in Germany where clubs must be owned 50% + 1 share by the fans in order to play in the Bundesliga, Bayern Munich, which would be key to any kind of ultra league, rejected approaches from the ESL immediately. On the flip side, the rapid capitulating to fans show that clubs and leagues that have been slow to respond to issues like toxic racism and homophobia can make fast decisions when they fear their core fans might vote with their feet and wallets. From a PR perspective, the ESL appears to have been dropped on team management out of the blue – and as the BBC notes in its post mortem, the founding member clubs retreated into silence leaving fans to thrash the ESL with memes and negativity and leaving clearly-frustrated team managers to navigate between their own distaste for the idea and the temptation to enact mutiny.  As Open Democracy has just reported, the ESL initiators hired a former Conservative party spin doctor to create a PR strategy just hours before the story broke – she barely stood a chance.
It’s also a funny little lesson in the appeal of simple stories of goodies and baddies. While money was no doubt the primary motivator, it was also borne out of irritation with UEFA which has been criticised for its lack of competitive games. And while UEFA has emerged from the past couple of days as ‘the goodie’, it’s also an organisation that has been plagued with its own corruption scandals over recent years, and those critical teams not included in the proposed ESL line ups are not quite Robin Hood either. Still, it’s been quite entertaining for footy fans still bored out of their mind during lockdown.
So what does the rest of the industry make of it?

Football is a community game.
Over recent years, players like Marcus Rashford have become true leaders in culture, wielding their unrivalled power to make a difference in communities.
In all the absurdity that is the Super League conversation, I truly hope there will be a wake-up call to club owners to finally understand the unmatched community power of their brands.
Football clubs have a power and role in their community that other businesses can only dream about. Yet the danger, as the last 72 hours suggests, is that owners treat them like soul-less franchises rather than people powered, purpose-driven brands.
It’s time to stop the own goals. It’s time to be more Rashford. 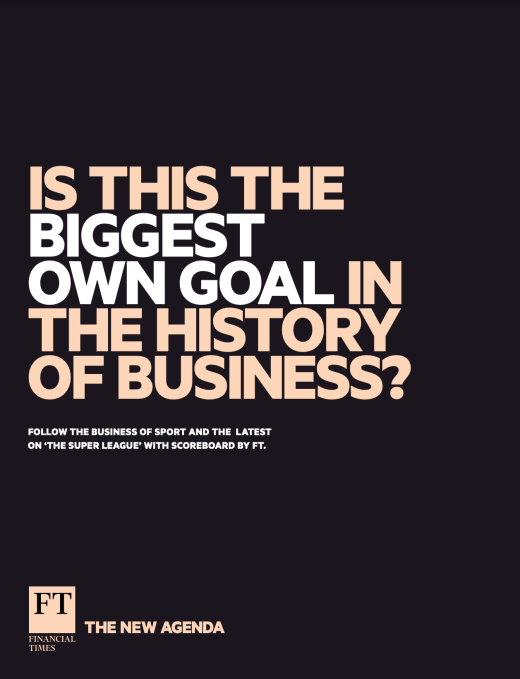 The ill-fated ESL provides a cautionary tale to Marketers; the danger of believing your own hype and forgetting what you sell.
To one set of fans, a football club is a reflection of their identity, of their local area, of a hundred-plus years of history. To another, their club is a fashionable badge, made up of players they like. There’s no historical or geographical attachment. What the clubs sell fundamentally differs by audience.
The former, heartland audience, reflects the brand’s provenance. The latter, though commercial ‘blue water’, views football as content. Great to appeal to, but they won’t be a regular income-stream for years to come. They’ll come and go; they aren’t the product.
The former audience are. They’re part and parcel of football; for them, the game incorporates all of the local rivalries, with real consequences for winning and losing. If that ceases, as Pep Guardiola put it, it’s not sport.
The twelve biggest clubs may serve football fans far beyond the typical club, but these aren’t the people who make their brand/s who they are. Marketers would do well to remember that when considering their next brand extension. Is the world really ready for that yeast spread deodorant?

It would have destroyed the diversity and local rivalries that make European soccer so appealing, even to those of us that watch it from afar. American owners trying to make soccer/football more like an American sports league without relegation don’t seem to understand it’s something no fans anywhere want. It will be impossible for them to justify beyond their own financial gains.

The idea of a Super League - either a real plan or a mooted plan to pressurise UEFA into favouring the more powerful clubs - has been around for years.
This is the first time a group of clubs have committed to it publicly - and knowing there will be a backlash (even if many did subsequently backtrack on that decision).
Why? Money of course and the main drivers - the Glazers, Woodward, Agnelli, Perez etc. would have to wrestle with their conscience for more than a nanosecond in considering money versus fans and tradition - the latter does not register.
Was it greed? No more than any other business is greed. Yes, they want more money but that also comes from fear - there is no guarantee the big clubs now will continue to be the most successful, so they were looking to buttress that.
As a Spurs fan I can see why Daniel Levy originally went with it. If there is to be a Super League, he would see it as critical that Spurs are in it - otherwise they would be left behind, unable to repay the huge investment on the stadium and permanently consigned to a lower tier - all the top players, TV rights and attention would go to the Super League clubs and Spurs would no more be able to hang on to talent than Ajax can now.
Neither can I buy into UEFA, Sky, and the other 14 PL clubs (who surely would have jumped in if invited) being the moral saviours of football. They are all purely self-interested.
I still think the Super League is wrong though and ultimately would have degraded the competition and football - teams should qualify for anything based on their performance - anything else warps competition. West Ham are dreaming of the Champions League this season. It would be a sad day where that became an impossibility for any club outside a self-selected elite.
Of course competition is already warped by Russian crooks and Middle Eastern dictators but we should be trying to make it more fair, not less. Even(ish) competition is the essence of sport.

Myself, like many other people in North America who have come from European families, soccer (football) has been a huge and important part of our lives since our childhood. We’ve grown up supporting teams in the European countries where our families come from, and may still reside. Disgustingly, many of these teams agreed to join the disgrace that is the Super League, purely to increase their profits, not for the sake of competition or the fans. Rich, disconnected club owners from America and other countries that do not care about the good of the sport, competition, or the importance it has to millions of supporters around the world, tried to establish this league purely for greed. And the model this league was built upon very clearly reflects that. No relegation, no consequences if you lose and end up at the bottom of the table, because your club is still making millions at the end of the day. With UEFA, FIFA, and other organizations now threatening to throw these teams and players out of all other competitions, the formation of this Super League placed the true purpose of the world's sport in jeopardy.
view more - Trends and Insight