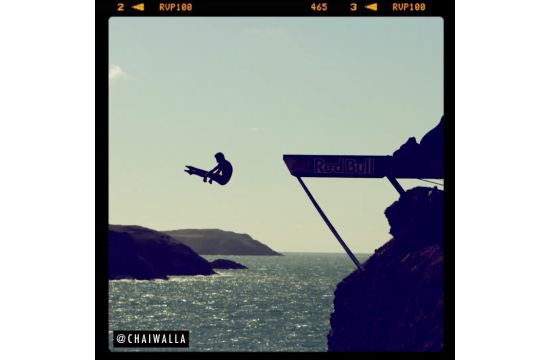 Red Bull has released a new stop motion film, made up of thousands of photos taken by the UK’s top Instagramers at their recent Cliff Diving event in Wales.

On 14th September Red Bull Cliff Diving returned to the Blue Lagoon on the stunning Pembrokeshire coastline - the 6th stop of the World Series which sees ten athletes performing unbelievable dives from a 27m high platform.

Red Bull collaborated with leading instagramers @danrubin, @jeera and @chaiwalla with support from @Finn to take on the ambitious challenge of creating a stop motion film, capturing all of the breathtaking views and action from the day through their lenses.

Stitched together using pictures shot over just a few hours, the 2-minute long video takes the viewer on a tour of each Instagramer’s journey around the Blue Lagoon, as they capture the beautiful rustic location, the crowds reactions to the incredible dives and the excitement of the day.

You can view the film, see behind the scenes footage and read interviews with the Instagramers about the ‘making of’ the film here: redbullcliffdiving.com