BBH races a Twitter-powered plane against a real flight 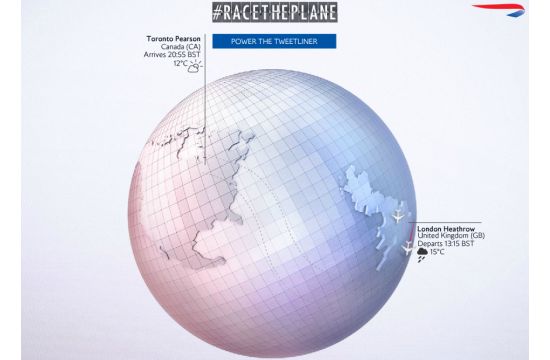 To celebrate the launch of British Airways’ new brand campaign and the arrival of the new Dreamliner 787, BBH London is helping the brand to stage a world first. On Thursday 19 September, British Airways will launch the world’s first online race between a virtual plane and the real British Airways 13:15pm flight from London Heathrow to Toronto.

Users will be invited to mention #racetheplane @British_Airways on Twitter, with every tweet fuelling the “Tweetliner” - a virtual version of the aircraft racing against the actual flight. People will be able to visit www.ba.com/racetheplane to follow the race action in real time and see the amount of miles travelled and still to go, and all those who tweet using the hashtag #racetheplane will be in with the chance of winning one of five pairs of British Airways flights to Toronto.

The campaign is being supported by YouTube pre-rolls, and social outreach and British Airways’ social media channels. A second race will take place on Tuesday 24 September to coincide with the launch of the A380 superjumbo and it’s inaugural flight from London Heathrow to Los Angeles.