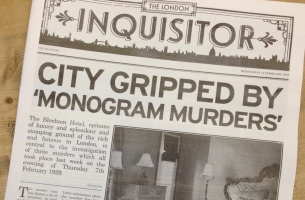 To celebrate the release of the brand new Hercule Poirot mystery The Monogram Murders in paperback, HarperCollins and creative agency Ralph have created an innovative way to sample the novel, by launching a new free newspaper on to the streets of London.

10,000 copies of the exclusive 1920s style newspaper will be handed out and will contain the first chapters of the novel. For added authenticity, the paper will also feature original adverts of the time, sourced from the archives of brands such as Unilever, Fortnum&Mason and John Lewis.

Newspaper boys, painted in ‘greyscale’ makeup will bring 1920s London to life in an eye-catching way, distributing the exclusive newspaper to evening commuters and creating black and white tableaux vivants.

The Monogram Murders is written by internationally bestselling crime author Sophie Hannah and marks the first time that the Agatha Christie Ltd. has approved a continuation novel featuring Hercule Poirot, her most beloved creation.

Kate Elton, Executive Publisher Fiction & Non-Fiction at HarperCollins Publishers, said: ‘Sophie Hannah’s Hercule Poirot novel was a fantastic success in hardback across the world amongst fans as well as general readers, and the paperback gives everyone a chance to exercise their ‘little grey cells’ in solving the amazing puzzle Sophie has created.’

Hilary Strong, Managing Director of Agatha Christie Ltd, said: ‘Sophie’s brilliant imagining of Agatha Christie’s most beloved and complex character Hercule Poirot forms part of Agatha Christie Ltd’s ambition to bring Christie’s stories to a brand new audience in this, her 125th anniversary year. The release of The Monogram Murders in paperback complements our exciting raft of Christie screen dramas including Partners In Crime starring David Walliams and Jessica Raine and And Then There Were None, both for the BBC, and a new film adaptation of Murder on the Orient Express for Fox.’

Chris Stack, Creative Director at Ralph, said: ‘We really liked the idea of using sample chapters as a way to get people hooked on the gripping detective novel - and grabbing a free newspaper is pretty much a reflex action for London commuters. 1929 was all about newsprint, the year before radio news really took off, so producing a free newspaper was the perfect creative solution to keep all our activity in the Poirot world.’

The limited edition newspaper will be distributed from Oxford Street, Kings Cross, Euston, London Bridge and Liverpool Street today (May 21st) from 4pm-7:30pm.