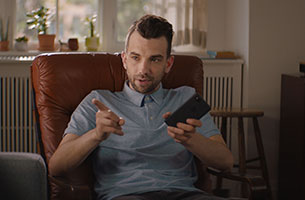 RBC is introducing an atypically lighthearted campaign promoting its suite of products and services.

Canadian celebrity Jay Baruchel is the star of the new “RBC Take 20” campaign, which uses a mix of comedy and honesty to position the financial services company as relevant and approachable in a crowded – and sometimes overly earnest – advertising category.

Aimed at a millennial audience, the national campaign developed by BBDO Toronto, highlights a number of RBC services, including its online MyAdvisor tool, its app-based “NOMI Find & Save” function, and a Petro-Canada rewards offer that enables RBC cardholders to save three cents a litre on gasoline.

All of the ads urge viewers to “take 20 minutes with RBC” to experience the RBC difference.

“Many younger consumers tend to have a transactional relationship with their bank, but real financial advice can make a big difference and help Canadians transform how they manage their finances,” says Alan Depencier, Chief Marketing Officer RBC, Personal & Commercial Banking and Insurance. “We can’t take ourselves too seriously, and partnering with Jay allows us to connect our brand to our target in an authentic manner, with a touch of humour in an occasionally serious category.”

Breaking today, the campaign is built around a series of spots ranging in length from 6 to 30 seconds. The ads feature Baruchel as a slightly goofy but likeable everyman, pondering everyday financial scenarios and articulating how RBC is helping with his finances – all while introducing viewers to concepts like a “turducken of savings,” “a toonie a tank” and “squirrelly banks.”

Baruchel is well-known to RBC’s target audience, many of whom grew up watching him on Popular Mechanics for Kids and in subsequent movie roles including This Is the End, She’s Out of My League, Goon and the voice of Hiccup in How to Train Your Dragon.

In one :30 spot, Baruchel is shown wondering aloud to an RBC advisor about various financial tools such as RESPs, mutual funds, GICs and TFSA’s, asking questions like can put his hockey card collection into an RRSP. In another spot, Baruchel coins the phrase “a toonie a tank” to illustrate the potential customer savings on the partnership with Petro-Canada.

The spots were produced by Skin & Bones and directed by Matt Lenski.

“RBC is committed to helping Canadians achieve their Somedays,” says Depencier. “Finding a fresh and unique voice allows us to cut through the acronyms and financial jargon, and get straight to that goal.”

RBC is proud to be recognized with the J.D. Power award for Highest in Customer Satisfaction Among the Big Five Retail Banks. The recognition comes from J.D. Power’s 2018 Canadian Retail Banking Study, drawing upon direct feedback from thousands of consumers. The J.D. Power study measures overall customer satisfaction through a combination of categories, ranging from products and fees, to convenience and advice. RBC demonstrated high scores in Communication and Advice, Account Opening, while standing out with the highest percentage of mobile customers.