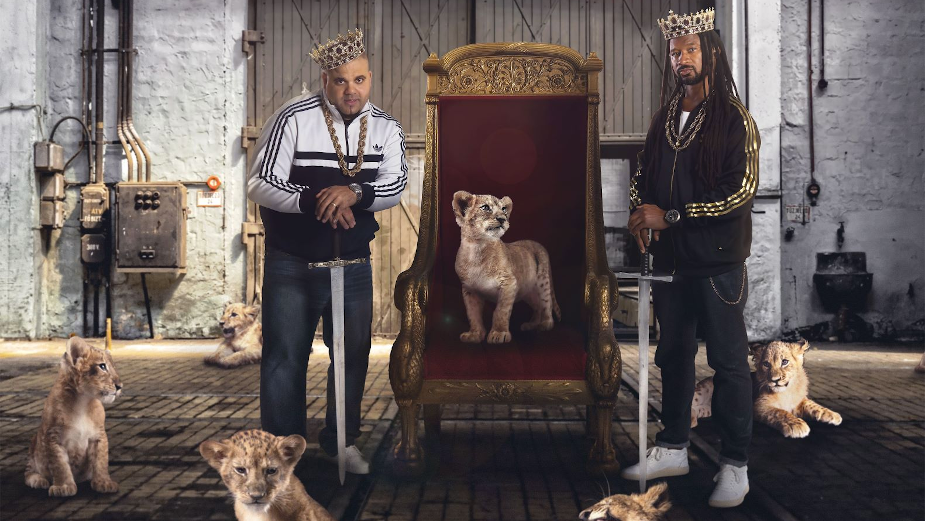 Baby Lion Media has opened its doors as the first Black and Latino-owned production company specialising in creating advertising content for agencies and brands. Executive producer, Ramon Nuñez, better known as “Ra” and director Jerry Digby, widely known as Digby, are the founders of Baby Lion Media. Ramon is an award-winning agency veteran who produced some of the industry’s most memorable ads when at CP+B, while Jerry is a filmmaker and artist whose creative portfolio includes work as a stills photographer, animator and designer.

Baby Lion’s founders each bring 20 years’ experience in making ad content, with resumes that include tenures with major agencies and production houses and showreels full of groundbreaking ads and campaigns for global brands.

Casting themselves as a new-era production company led by 'Storytellers Born Fearless', Baby Lion Media has already hit the ground running, with several major projects already under its belt: a multicultural Google campaign out of the Miami-based boutique Lovers Not Haters (directed by Gracia), for which it handled all of the production, animation and post. It also produced a digital anti-poverty experience, 'A Closer Look', for the United Way of Greater Portland, which it co-created with The VIA Agency. Baby Lion has also recently produced work for Verizon, the NBA, Dove, AXE, Carvana and Jimmy Johns, and contributed to the successful launch of new video game company iiRcade.

Ramon, who emigrated to the US from the Dominican Republic, co-launches Baby Lion after a stellar career in agency production. Most recently, he was director of production / EP for The Community, named 2020 Multicultural Agency of the Year by Ad Age. Prior to that he spent seven years as VP / executive integrated producer at Crispin Porter + Bogusky, where he led production for accounts like Domino’s, Best Buy, Microsoft, Infiniti, Fruit of the Loom and American Airlines. He got his start in the business as a Junior Producer at Fallon, where he worked on the legendary BMW Films series.

Jerry is a genuine polymath; a bilingual Air Force brat who grew up in the US, Asia and Germany, he’s worked in photography, animation and live-action production. This shows in his work, which ranges from ad campaigns to broadcast promos to entertainment content to print ads for such clients as Audi, MARVEL, Nissan, ESPN, Verizon, Hasbro, 20th Century Fox, Dark Horse Comics and Got Milk?

Starting as a PA in New York, Jerry worked his way up the production ladder, helped by his diverse background, life experience and determination. This led to work as a key PA on numerous shoots, during which time he worked closely with (and learned from) some of the industry’s top directors at such major production companies as Park Pictures, MJZ and RSA. Outgrowing New York, he relocated to L.A. and became the creative assistant to MJZ’s Marcus Nispel during a particularly productive time in the director’s career.

Baby Lion debuts with a unique offering: “Our mission is to merge cultural insights, storytelling, technology and production at the highest levels of creativity” stated Ramon. Adopting what he and Jerry call a 'speedboat mentality', they’re able to tap a wide network of production and creative talent in service to their clients, drawing from a pool of multiculturally diverse professionals who can assure that every project they handle rings true with authenticity and relevance. Ramon said: “We approach things from a different perspective.”

“We see ourselves as culturally fluid, which is a particularly valuable quality to own in this era of heightened sensitivity to a message’s style and tone,” added Jerry. ”Consumers and brands alike are demanding that our industry reflects society. And diversity is in Baby Lion’s DNA.”

As minorities who’ve succeeded in the largely white world of general-market advertising, both Jerry and Ramon understand what Baby Lion Media represents. “We blazed trails in our careers when ‘diversity’ was just something being talked about, but had little tangible results,” said Jerry. “Now we’re determined to create ways for more people to follow us.”

For example, faced with few directing opportunities from established production companies, Jerry hustled to create his own, building a network of clients across genres and categories – people who were eager to work with him, either on a freelance or independent basis. Whether it was shooting still photography, designing graphic packages, directing live action or executive producing international productions, all of it contributed to get him to where he is today. Indeed, he says the twists and turns his career took “made me a better director and a better creative.”

Ramon is proud of the fact that he’s worked for some of the most creative agencies in the industry, from his days as a junior producer at Fallon to leading the production department at The Community. “And here at Baby Lion, Digby and I have combined our creative storytelling experiences to build something new,” he remarked. “We believe we’ll be able to simultaneously break new ground for our clients and open more doors for people like us.”

“Our industry needs to change,” agreed Digby. “Ra and I had to walk through our own doors, which is what you have to do if they don’t let you in. Now, with Baby Lion, it’s time for us to pave the way for others.”